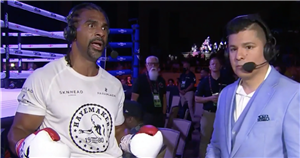 And both men will be laughing all the way to the bank after tip-toeing around the ring for eight two-minute rounds.

Ultimately, and for what it's worth, Haye had his hand raised after being given the nod by all three judges before he unexpectedly called out Fury.

"There's one fighter I would come back to professional boxing for and that's Tyson Fury," he said. "That big fat dosser; I know I'm his kryptonite, I know what he can't handle.

"My overhand right… which I didn't even show in there tonight, I didn't want to scare him. If I'd have let my right hand go, he wouldn't be taking the fight.

"He thinks it would be an easy fight but's wrong. I know he's ducking Anthony Joshua but he doesn't want that work. We were supposed to fight in 2013 but I was injured but I'm healthy and I'm ready to go."

Haye was last seen in the ring in 2018 when he was stopped for a second time by Tony Bellew.

He hung up his gloves shortly afterwards after seeing his body ravaged by shoulder, bicep and Achilles injuries.

But a boozy row in a nightclub saw him agree to a comeback against former sparring partner Fournier.

Fournier, who brought a professional record of 9-0, was convinced he could beat his aged and brittle mentor.

Haye initially offered a four-round spar in his gym but Fournier pushed for a full-blown fight and new kid on the block Triller obliged.

Both men claimed to be earning more than £4million for their efforts over eight two-minute rounds.

And it was clear this was nothing more than a cash grab from the first session as Haye was scored the winner by margins of 79-72 twice and 80-71.

What Fury thinks of his former rival's comeback and call-out remains to be seen.