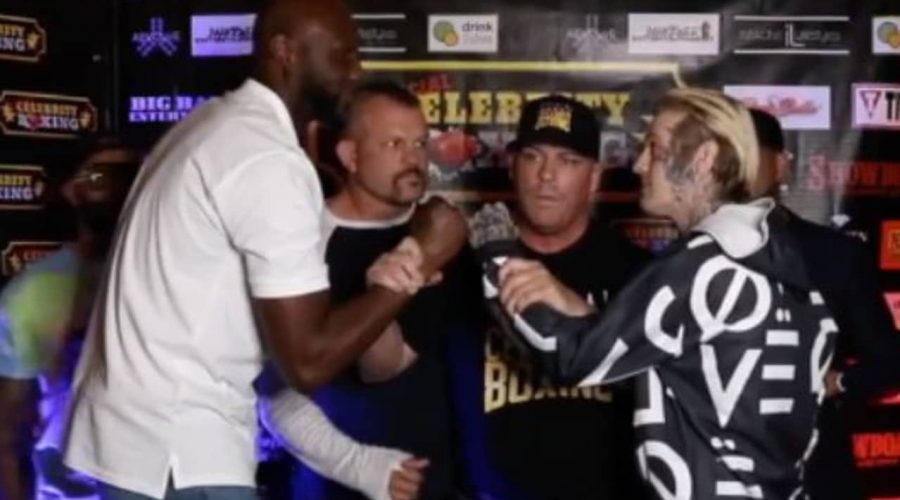 If you thought a YouTuber fighting a professional boxer with a 50-0 record was the craziest thing to ever happen in the sport of boxing, you’re wrong.

Step forward the strangest fight of the century.

A former NBA champion who’s also well-known for his marriage to one of the Kardashians will don the gloves against a musician that holds any form of relevance thanks to an album he made when he was 13 years old.

That’s right – Lamar Odom will square off against Aaron Carter in a three-round exhibition fight at the Showboat Casino in Atlantic City, New Jersey.

A photo posted on Twitter showed the two men facing off, and it provided a sad reminder to sports fans about just how far the sport of boxing has fallen in recent times.

41-year-old Odom won two NBA championships with the Los Angeles Lakers, but was placed on life support in 2015 after suffering kidney failure, several heart attacks and 12 strokes after overdosing on a lethal combination of cocaine and alcohol among other substances.

Odom is known for his marriage to Khloe Kardashian.Source:Supplied

The basketballer stands at 6ft 10”, giving him a major advantage over his opponent.

Aaron Carter stands at 6ft 1”, which is normally an optimal height in sports but not when you’re coming up against a former basketballer the size of Odom.

The 33-year-old is the brother of Nick Carter, who was a member of the famous boy band Backstreet Boys.

Carter is best known for his album Aaron’s Party (Come Get It), which featured his cover of “I Want Candy” as well as “Aaron’s Party”.

He also dated Lindsay Lohan and Hilary Duff at the same time.

Carter is unrecognisable from when he first burst onto the music scene as a teen.Source:Instagram

In a video posted on social media, Carter highlighted just how prepared he is for the fight.

“This is a crazy matchup. It’s like David and Goliath. I’m really looking forward to this fight.

“I just wanna let you guys know that I’m not just a music producer, an entertainer, a singer, a dancer. I’m also a fighter. I grew up street fighting and I’m really looking forward to this match.

“But my dad always said, ‘the bigger they are the harder they fall.’ So, Lamar, I’ll see you there bro.”

The absurd fight will take place on June 12 at 11am (AEST) via Fite TV, and you can purchase the stream for $AUD39.