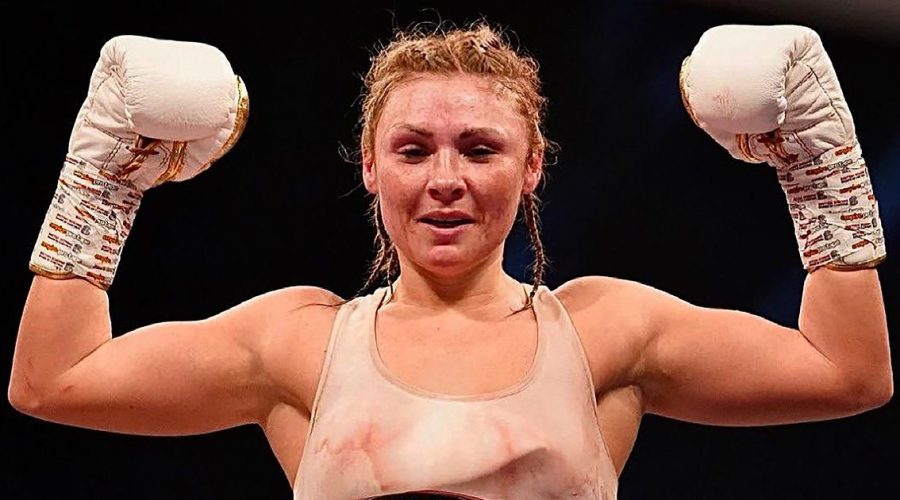 Shannon Courtenay was unable to sleep after her 10-round war with Ebanie Bridges earlier this month.

When she did finally hit the hay, the first thing she did when she woke up was make sure she it hadn’t all been a dream.

Just seven years after first stepping foot in a boxing gym in a bid to lose weight, she had become WBA bantamweight world champion.

“After the fight I didn’t sleep actually because your adrenaline is going, you’re just buzzing,” she says.

“I eventually went to sleep on the Sunday night and when I woke up on Monday morning, the first thing I did was rush to the living room and touch the belt to make sure it was real life and I wasn’t dreaming it!

“It’s amazing, it’s a dream come true. When I first went into the gym, I just went in to lose weight. Fast forward six or seven years and I’m world champion. It’s a bit crazy, isn’t it?”

Courtenay’s moment of glory seemed a million miles away last August when defeat to Rachel Ball at Matchroom Fight Camp left her dreams in tatters.

“It was horrendous,” she recalls. “I’ll be honest with you, I was suicidal after that fight. I hit a low I never knew I could hit.

“I was in such a bad way and you kind of have to look around at the way the world is right now.

“I looked around and thought, ‘actually, you lost a fight, it isn’t the end of the world’. There’s people who can’t put food on the table for their kids right now, and you’re complaining because you haven’t won a fight.

“You kind of have to take a little reflection on yourself and think, ‘right, you can either sit here, mope around and feel sorry for yourself’ or you can get in the gym and fix this problem.”

Less than a year later, Courtenay is able to look back at that defeat and the painful days which followed with a new perspective.

“It was a blessing in disguise,” she says.

“It humbled me, I obviously needed humbling. It proved to me I was beatable, so I had to train a lot harder than I was.

“And it opened my eyes to a lot of things as well, not just in the boxing world. When you lose you see who really is and who isn’t there for you, so now I’m surrounded by the right people.

“Once I sat back, I realised that I don’t know what it is, but this is all part of god’s plan, this is going to play out for me one way or another.

“I do believe if I had won that fight, I wouldn’t now be world champion because it was part of god’s plan and this is what he had in store for me.”

Having emerged from the experience stronger, Courtenay is turning her attentions to bigger things, far from content with just her first world title.

“Defending it isn’t all I want to do, I want to go on and unify,” she says.

“I’m ecstatic and over the moon I’ve won this belt, but I’m not content. I want all the belts now.

“People said I was crazy when I said I’d be a world champion, and I’ve done it within two years. I will unify, that’s going to happen.”

There are also high hopes that her next big night can be shared with those who have not been ringside for the rollercoaster last 12 months.

“I believe my next fight will be in front of crowds, and to have my mum there and all my family and friends will be amazing,” she says.

“But I hope I don’t see her – I don't like seeing her when I fight because I know she’s a nervous wreck and it makes me feel bad, so I hope she blends into the crowd a little bit!”

When Courtenay first had the world title in her possession, calling her mum was at the forefront of her mind.

“It was a special moment,” she recalls. “It just made it all worth it when I got to show her the belt.

“I hadn’t properly seen her for 16 weeks, and when I’m in camp, I’ll fully admit I am a nightmare.

“I’m a miserable cow. I don’t like talking to people, I’m very short on my text messages and I’m hungry because I’m making weight. I’m so zoned in that I don’t really sit and have any quality conversations with anyone, including my mum, because I just want to get off the phone.

“When I got to bring home the belt and say, ‘this is what I was working towards’, it was almost a way of saying thank you and showing her why I’ve done it.

“After the fight I had to do media straight away, then I got rushed in to have my head stitched together because it split open at the side in round two.

“My phone was in my changing rooms so my coach said, ‘well I’ll go and get it and FaceTime her now’.

“So he FaceTimed her, but the first thing she saw was me lying on a hospital bed with my head getting stitched together so we gave her a bit of a panic!

“So I called her back then, and she was crying, she was just over the moon, ecstatic.”

In the days which followed, with the belt safely in her possession, Courtenay could not resist the urge to rewatch her bloody encounter with Bridges.

The Australian was left with serious swelling over her left eye whilst Courtenay’s stitches were a price worth paying from a fight which drew widespread praise.

“I’ve watched it back three times now and I’ve written down the mistakes that I made in each round,” she declares.

“I think looking back I did make it hard work for myself. I could’ve just boxed her and made it so much easier for myself.

“But I do enjoy a tear up as you could say, and in a way it paid off because people are saying it’s one of the most entertaining women’s fights they’ve ever seen.

“The buzz about it has been fantastic, it’s a contender for fight of the year already which is amazing.

“It was an absolute war. The pair of us, after two rounds, were covered in blood so I think it was a good advertisement for women’s boxing.”

Having noted where she can improve, attentions are now likely to turn to a rematch with Ball.

Ball, who won the WBC interim super-bantamweight title in November, was due to take on Bridges before being forced to withdraw due to coronavirus handing Courtenay her opportunity.

“For starters, I think for the last fight I weighed in at 127, basically a featherweight, this one I’m 118. I’m a world champion at bantamweight and that’s going to benefit me. I think she’s going to find it harder to get down to 118.

“I’m faster, I’m sharper, I’m stronger than I was in the first fight. I’ve got a much better training regime, a stricter life now. I’m living in camp, not half and half, I’m in it full-time.

“And I’m world champion now. I’ve got that confidence going into the rematch that this is my belt.

“I’m coming off the back of a huge win and before that a huge knockout as well, so the confidence is all in my favour as well.”