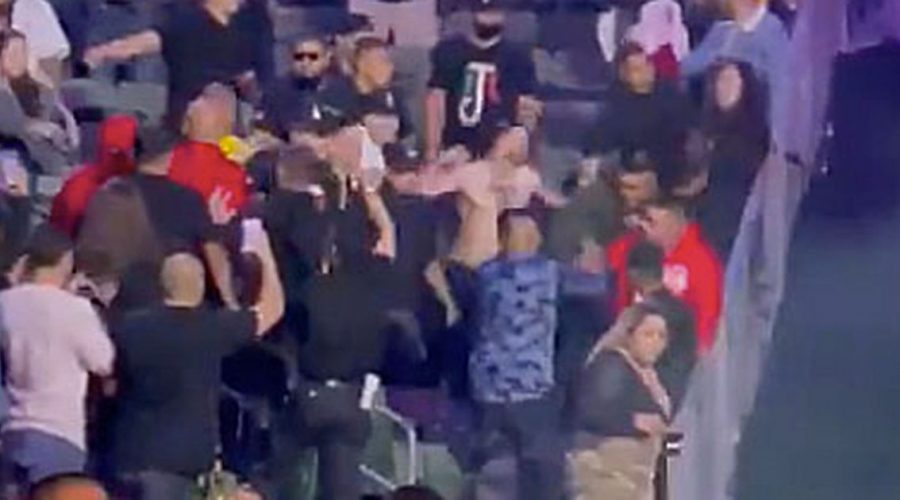 Andy Ruiz Jr’s comeback win over Chris Arreola was overshadowed by sickening scenes in the stands as boxing fans brawled amongst themselves.

Violent clashes broke out among a pocket of angry spectators in the corner of the 27,000-capacity venue in California before Ruiz Jr’s bout.

Journalist Mike Coppinger captured the shocking footage which appeared to show fans aiming punches and kicks at each other in the stands.

The violence lasted for around two minutes before security at the venue finally stepped in and intervened to bring an end to the fighting.

It was bad image for boxing to display on a night that was supposed to be all about Ruiz Jr’s comeback after 17 months out of action. The American hadn’t been seen in the ring since his 2019 rematch with Anthony Joshua which saw AJ regain his heavyweight titles.

Ruiz Jr., now two-stone lighter than his defeat to Joshua, looked good in the opening exchanges but was put down by Arreola in the second.

But the 31-year-old regained his composure and appeared to tire Arreola, who picked up some swelling under his left eye for his troubles. As the fight wore on, Ruiz Jr. began to exert the class and composure which had previously seen him crowned a heavyweight champion. Speaking after the fight, Ruiz Jr was in reflective mood after marking his comeback with a win: “We won the victory.

“But remember, I was the lowest of the lowest and I had to come back to the ladder.

“We did what we gotta do. And thanks to God that we got this victory and now to the next.”