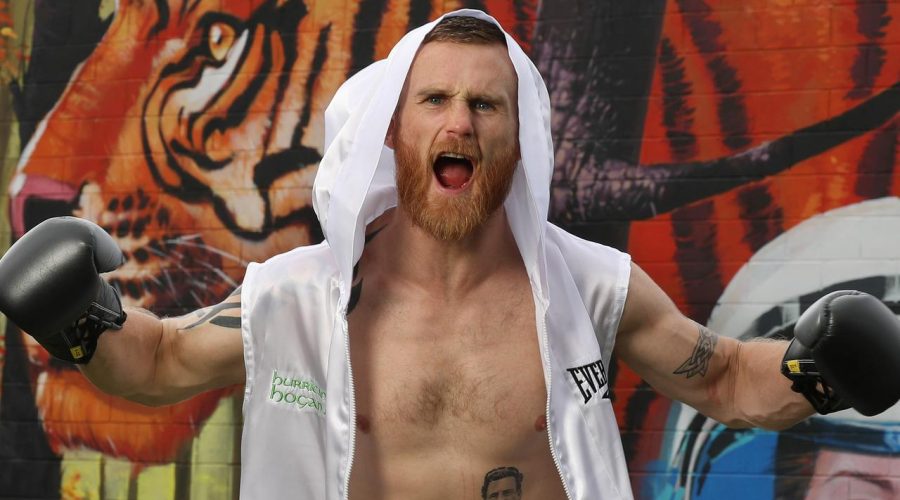 “Tim Tszyu has made a big mistake”.

Those are the words that regularly pop up as text-message torrents on Dennis Hogan’s phone and the hungry ‘Hurricane’ has vowed to bring the dire warning to life by handing Tszyu the biggest belting of his career.

Hogan is perplexed, almost offended, at being installed by bookmakers as a $5.20 outsider to consign raging $1.14 favourite Tszyu (17-0, 13 KO) to his first defeat in 18 professional fights in Newcastle on March 31.

Even allowing for Tszyu’s emphatic recent disposals of Jeff Horn and Kiwi Bowyn Morgan, Hogan is a dangerous customer.

The Brisbane-based Irishman (28-3-1, 7KO) has amassed an impressive record and still believes he was robbed of a world title in his controversial majority-decision loss to Jamie Munguia in his Mexican heartbreak in December 2019.

Since then, Hogan showed the guts to step up in weight against middleweight mauler Jermall Charlo (31-0).

Dennis Hogan is full of confidence ahead of his big bout. Picture Annette DewSource:News Corp Australia

While he was dropped in the seventh round by the WBC king, Hogan’s two consecutive world-title losses have taught the 36-year-old that Tszyu will bring nothing he hasn’t seen before in their super-welterweight showdown.

“Do I feel I can win? C’mon mate, I’m winning this fight. There will be no other outcome,” Hogan said.

“There is a thing called the ‘hype train’ in Australia and Tim is on the hype train.

“I have people of importance in the boxing world in America messaging me saying Tim has made a big mistake.

“The bookies have me as a major outsider, but the WBC have me ranked above Tim (10th versus 11th) because they aren’t in the bubble on the hype train.

“It bewilders me a little bit that people think Tim is the favourite, but on fight night I will get the job done and then I will hear the excuses from the critics who are writing me off.

“I am ready to make Tim Tszyu look average and put myself back in the picture for a world title.”

Hogan is under no illusions about the gravity of this fight. For all his heart and desire, Hogan has gone 820 days without a victory, having last triumphed in December 2018 with a 12-round unanimous decision over Jamie Weetch.

A third consecutive defeat against Tszyu would leave his world-title hopes in tatters, but Hogan is steeled by his Munguia masterclass.

“I have fought for world titles and good judges know I beat Munguia,” he said.

“I am a world champion in my mind and one day it will be a reality.

“Can anyone say Tim Tszyu is as good as Munguia … and I beat him.

“If you look at our styles, Tim is absolutely tailor-made for me.

“I believe Tim can be world-class in a few years but he is meeting me at the wrong time.

“There are chinks in Tim’s armour and I will exploit them.

“I am so hungry for this and that’s the difference. Deep down, Tim knows how tough this fight is … I am going to hurt him.”

Hogan stepped in the ring with the brutal Jermall Charlo. Picture: Getty Images/AFPSource:AFP

There were fears this fight was in jeopardy amid speculation Hogan injured his nose in training last month. But Hogan insists he will be 100 per cent fit to topple the son of Kostya in “Tszyu-castle”.

“After the Charlo fight, my nose was damaged and it was set wrong,” he said.

“My nose was pretty sore and playing up because it was out of position, but I’ve had it realigned.

“The (specialist) said cartilage was out of place, but he has clicked it back in and it feels much better.

“My strengths are suited perfectly to his weaknesses, so Tim is going to be in trouble.