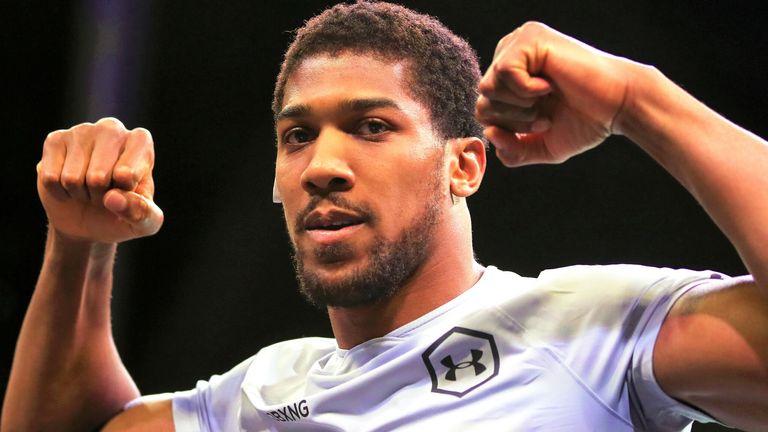 Anthony Joshua says Deontay Wilder’s only weapon is a powerful right hand and has vowed to brutally expose his American rival if they finally share the ring.

Wilder wants to resurrect talks for an undisputed world heavyweight title clash against Joshua, if he regains the WBC title in a third fight with Tyson Fury in Las Vegas on July 24.

But Joshua has dismissed Wilder as a serious threat to his WBA, IBF and WBO titles, insisting the Alabama man has already shown his limitations in a stoppage loss to Fury last February.

“He isn’t an elite-level fighter, in my opinion,” Joshua told Sky Sports News.

“He’s good. It’s the heavyweights, so they always know one punch can change the course of a fight.

“But I’ve never, ever seen in the heavyweight division a fighter going to war with just one weapon, which is what they say is his right hand.

“When you get to the top level? Trust me, that don’t last anymore. That don’t work.

“As we’ve seen now with certain fights of elite-level fighters, he struggles at the top level, and there’s a lot more of us waiting for that opportunity as well to kick his ass.”

Wilder suggested that “excuses” have already been made to prevent a fight against Joshua, who is preparing for a WBO mandatory title defence against Oleksandr Usyk, with Tottenham Hotspur Stadium expected to stage the fight in September.

“Most definitely, hands down [I want the Joshua fight], Wilder told Sky Sports.

“Without no excuses, no mandatories, nothing in the way.

“As I see, they already making up excuses. They already got a mandatory planned ahead.

“No one really wants to fight someone like me, and I don’t blame them.”

Predicting a victory over Joshua by knockout, Wilder said: “In a devastating fashion.”

Joshua pointed to his record as proof that he is willing to face any opponent, telling Sky Sports: “This is the first time I’m talking about Deontay Wilder, so I don’t know what excuses he’s thinking I’m making.

“I’m a throwback fighter. Check the resume, I’ve been in with all of them. The new school and the old school, and there’s still a lot more to do. I’m fighting a great fighter in Usyk.

“I will fight them all. Wilder is just another one in the pecking order, no problem.

“I don’t know what excuses he’s talking about.

🇮🇪 "I'm a young, Irish, southpaw heavyweight – there are no others!" 🇮🇪

“Talk is cheap, it’s the cheapest thing to buy on Earth is talk.

“I am an elite-level fighter. I’m not one of those tomato cans he’s knocked out.

“He’d better watch what he’s saying and have a reality check, because when the day comes for me and him to face, I know what I’m capable of doing.”

Watch Vasiliy Lomachenko against Masayoshi Nakatani from 3am on Sunday, live on Sky Sports.

July 2, 2021 Boxing Comments Off on Anthony Joshua says Deontay Wilder's reliance on his right hand will be brutally exposed again if they share the ring
NFL News