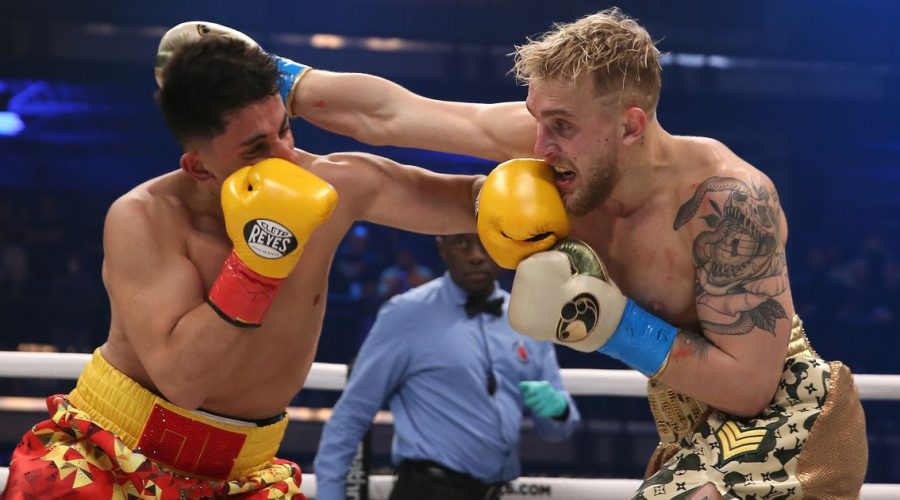 The social media stars fought in Miami in January last year but 'Gib' is now backing his social media compatriot to get the win.

Paul stopped Gib in the first round of their clash on the undercard of Demetrius Andrade's middleweight title defence against Luke Keeler last year, after months of call-outs from the British creator.

And he has gone on to amass a 3-0 pro record with two more KOs of NBA player Nate Robinson and UFC fighter and Olympian Ben Askren.

Meanwhile Gib will return to the ring for an exhibition bout, which won't count on his pro record, against Tik Tok star Tayler Holder this Saturday night.

And speaking ahead of the event, he told Mirror Fighting that he wants Paul to beat former UFC welterweight champion Woodley on August 28.

"I've been hearing rumblings about this," Gib said. "I haven't really researched it too much but taking on a UFC champion is a big step, a way bigger step than Ben Askren.

The Saudi Arabian-born British YouTube star won't be concerning himself too much with what his former opponent is doing, however, as he gears up for his own boxing comeback on Saturday at the Hard Rock Stadium in Miami.

He'll face another social media star in Holder, who many insiders have claimed is the best technical boxer competing on the 'Social Gloves: Battle of the Platforms' event.

"I'll let them go with this narrative that he's the most experienced," Gib said. "That's the opponent I'd like, but I don't actually think he has the experience.

"He's had no fights, from what I know," Gib said. "And even if he has I've been there before on the big stage three times, I fought twice before I faced Jake Paul, so I'm the most experienced one!

"I've got a different hunger for this fight, I'm coming off the loss, I've put the work in, many of these other YouTubers don't that, they've said they're doing it for money.

"I'm not doing it for that, I know I call myself 'seven figure Gibber', that's cool, that's bravado, but I'm here for redemption because I've been here from the beginning."

And Gib is determined to make his mark in Miami.

He fought on the original influencer card headlined by KSI v Joe Weller for free against his friend 'MaxPlaysFifa', and then faced another social media star in Jay Swingler at the first KSI v Logan Paul fight.

And he says that he his planning to stop Holder early, despite the heavier 16oz gloves than he was using when he last fought at pro level, and the shortened two-minute rounds.

"He isn't going to be used to what I'm throwing at him, those 16oz gloves will feel like 10 to him, and I believe I will stop him, he isn't used to this!"

AnEsonGib will return to the ring to face Tayler Holder at 'Social Gloves: Battle of the Platforms', which takes place at Hard Rock Stadium in Miami Gardens on Saturday, June 12 and will stream on LiveXLive.com.

Fans in the US can attend the event live by purchasing tickets at Ticketmaster outlets and online at www.ticketmaster.com.

June 11, 2021 Boxing Comments Off on AnEsonGib puts rivalry with Jake Paul to one side for Tyron Woodley fight
NFL News