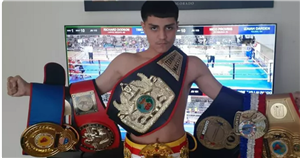 Decorated amateur boxer Donovan Garcia has passed away at the age of 15-years-old, six days after a horrific car crash left him with severe brain injuries.

Garcia was left with severe brain injuries after a car crash on January 11, according to his family's GoFundMe page. Doctors did their best to try and save him, but after performing final tests, he was unresponsive.

He was pronounced legally dead last week, but a final test conducted on Tuesday confirmed the news his family were all dreading.

"My 15 year old cousin, Donovan, was in a major car accident on Wednesday, January 11, 2023. He suffered severe brain injuries," an announcement from his cousin Rosmina Garcia wrote on the boxer's GoFundMe page.

"Donovan's final test was conducted yesterday. He was not responsive. They legally pronounced Donovan dead at 6:18pm on Tuesday, January 17, 2023. However, being that Donovan's entire body from the neck down was fully functional, his parents fought to keep him on life support.

"Despite their best efforts, Donovan’s health started to decline. Sadly, Donovan fought his biggest battle and went 7 rounds, but he was tired.

"His family wants everyone to know that he is at peace and they are at peace with God’s will. We will update everyone on services as soon as we can.

"Thank you everyone for the continued prayers, support, and love. Donovan’s memory and legacy will live on forever." Garcia won a Golden Gloves title in 2019, the Silver Gloves State Championship, and was also a Junior Olympics State Champion.

His former coach Manuel Alvarado described the youngster as having "a heart of gold". 'I had the pleasure of training him when he was 7 yrs old and got him registered with USA BOXING to start his amateur career,' Alvarado wrote. 'He went on to be a great champion beating some of the best boxers. Boxing was his passion.'