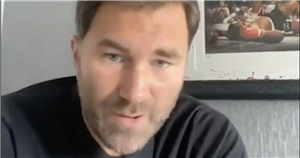 Hearn, who is currently promoting Canelo Alvarez's unification match with Billy Joe Saunders in the States, is hoping to officially announce the highly anticipated bout in Texas this weekend.

Joshua and Fury have been on a collision course since 'The Gypsy King' announced his comeback to the squared circle back in 2018.

However, despite the fight being labelled as one of the biggest ever, it has given us every reason to believe that it was never going to happen, but according to Hearn, that looks set to change.

“Next week could be massive," the English promoter told The Sun.

“Hopefully we can announce the big one out there as Fury will be there.

“It would be amazing to announce that before or after the fight as it’s a massive show.”

Fury, like Hearn, is due stateside for Canelo and Saunders' super-middleweight unification bout, and Hearn will be hoping to secure the deal with Fury before the night is through.

It's believed the bout will take place in Saudi Arabia on August 7th and could be worth a staggering £200 million, with both camps having the contracts drawn up.

However, just last month Fury's promoter, Bob Arum, claimed the fight was 'dead in the water.'

"It will take months for the Saudis to do their due diligence on such a huge deal," he told The Telegraph.

"It is not just a site fee, there are ancillary demands from the Saudis stretching into the broadcast deals and other things, it could take months for it all to play out.

"It could even take until 2022 the way it looks right now. The fight in July or August is dead in the water as far as we are concerned.

"The two fighters need to go and have other fights this summer while the negotiations for that fight in the Middle East conclude."

However, despite Arum's comments, Hearn remains hopeful: “We are all systems go. The fight is on, this fight is happening.

“All sides are reviewing the contract. I believe we will get an answer next week. I saw Bob Arum’s comments about the fight being dead but we know what we are doing.”

May 4, 2021 Boxing Comments Off on £200m Joshua vs Fury fight in August set to be “announced” on Saturday
NFL News