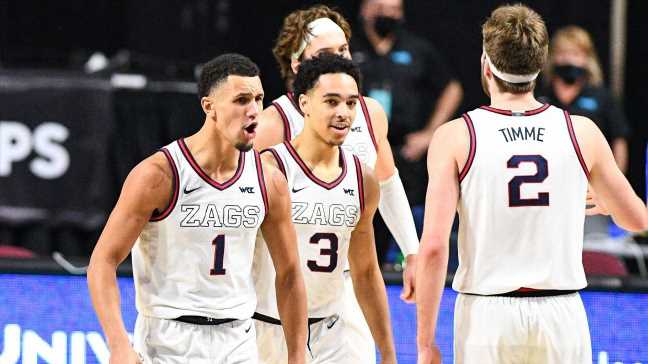 Undefeated Gonzaga is the clear-cut favorite to win the NCAA tournament, but sportsbooks are more concerned about another No. 1 seed: Michigan.

Gonzaga is 2-1 to win the tournament at Caesars Sportsbook by William Hill, followed by Baylor at 5-1 and Illinois and Michigan, who are each 6-1.

In early December, the Wolverines were as high as 125-1 to win the national championship at William Hill, but they won their first 11 games and quickly garnered attention from bettors.

Multiple sportsbooks pointed to Michigan as their biggest liability in their odds to win the tournament, including William Hill, which reported taking a pair of $30,000 bets on the Wolverines to win it all in February from a customer in Illinois.

“We’ve got a huge liability on Michigan,” Nick Bogdanovich, William Hill U.S. director of trading, said in a company release. “Michigan would be the worst result for us out of any team.”

Gonzaga enters the tournament at 26-0 and is looking to become the first team to complete an undefeated season since the 1976 Indiana Hoosiers. The Zags have attracted 20% of the money wagered on William Hill’s odds to win the NCAA tournament, by far the most of any team.

Michigan has drawn the second-most money at William Hill sportsbooks, followed by Baylor and Illinois.

There’s also some bookmaker paranoia about upstart Georgetown, which saw its odds to win the national championship improve dramatically after winning the Big East tournament over the weekend. Georgetown went from 2,500-1 to 200-1 at William Hill last week.

“People were jumping on their big odds as they progressed in the Big East tournament,” Adam Pullen, assistant director of trading for William Hill, told ESPN. “Georgetown is certainly playing well at the right time, so their odds were very attractive, and that liability quickly adds up.”

Creighton, which lost to Georgetown 73-48 in Saturday’s Big East tournament championship game, had attracted the largest reported national championship bet at sportsbook PointsBet, a $10,000 wager on the Bluejays at 20-1 odds.