Team USA rolled towards an 11th FIBA Women’s World Cup title on Thursday but they may be without influential wing Kahleah Copper for the medal rounds.

Copper went down with what appeared to be a left hip injury in USA’s 88-55 quarter-final win over Serbia and she will need scans before racing the clock to return before the tournament is over with her side to play a semi-final on Friday and the gold or bronze medal game on Saturday.

USA coach Cheryl Reeve has praised Copper athleticism and self-confidence in this tournament as one of the newcomers on their roster. 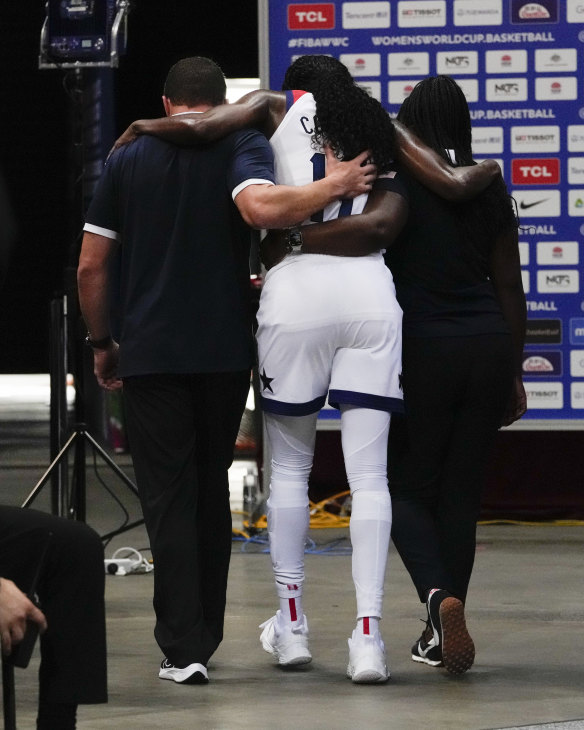 Kahleah Copper is assisted from the arena.Credit:AP

Reeve said Copper would have scans before they decided her playing future.

USA wing Alyssa Thomas has been a revelation this tournament despite arriving just before the first game and she had arguably her best game against Serbia with 13 points, 14 rebounds, seven assists and three steals.

Thomas said she knew she had to do more after Copper went down injured.

“You don’t want to see anybody go down like that, of course, thoughts and prayers go out to her, she’s a phenomenal player, but if one goes down you’ve got to step up even more and play harder to fill that void,” Thomas said.

Reeve said she knew Thomas would make an impact this event.

“She scored, rebound and she got the extra possessions on offence,” USA coach Cheryl Reeve said.

“Defensively she’s hard to play against and she had a near triple double and I think if we made a few more of those open shots, she has a triple double pretty easily.

“She’s been such a part of our identity defensively. I can’t say enough about her value. I know it and playing against them, you know, in Connecticut – that’s a player.

“I’m just really excited that she wanted to be a party to USA basketball this go around and she’s given us everything she has and that’s providing us with a level of toughness.

“She has that passion and relentlessness that helps everyone else kind of feed off of her.”

Serbia put on a physical defensive display against USA which frustrated them early in the contest and guard Kelsey Plum, who had 17 points, said her side needed to be better.

“Credit to them. I felt like early on their pressure bothered us a little bit but we were able to get under control and second quarter defensively, think we held him to single digits which is kind of like our identity and what we want to be going forward in this tournament.”

Meanwhile, Adelaide 36ers centre Deng Acouth has been hit with a 10-game suspension and a $2300 fine for betting on NBL games while playing in the second-tier NBL1 competition.

Nine of the 10-games ban were suspended subject to no additional breaches and Acouth will serve his ban when the NBL season begins so will be able to play in Adelaide’s two NBA pre-season games against Phoenix Suns and Oklahoma City Thunder.

September 29, 2022 Basketball Comments Off on ‘You don’t want to see anyone go down like that’: USA sweat on Copper injury, cruise into medal rounds
NFL News