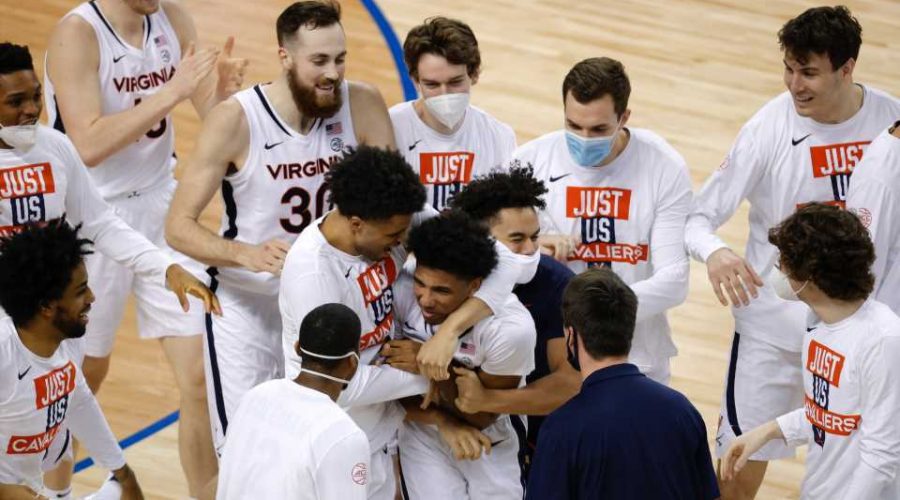 Virginia may be on the worst NCAA Tournament bubble ever.

This is not about the quality of the Cavaliers’ play. They are the 2020-21 regular-season champions of the Atlantic Coast Conference. They are No. 13 in the NCAA Evaluation Tool, also known as the NET rankings. They were scheduled to play Friday in the ACC Tournament semifinals.

Yes, that’s right. We changed the tenses on you there. UVa’s game against Georgia Tech was canceled because of a positive COVID-19 test within the Cavaliers’ program, and now their status is uncertain for the NCAA Tournament, where they technically are defending champions because they won in 2019 and no tournament was held in 2020.

They are not automatically excluded from competing in the NCAAs. But even though a team with Virginia’s record would be certain to be on the bracket in an ordinary season, neither is it a lock that they’ll be in Indianapolis next week with 67 other teams.

This was from the document presented to all aspiring NCAA Tournament teams in late January:

“Beginning approximately Saturday, March 6, all individuals in the official travel party of 34 will require seven consecutive daily negative COVID-19 tests prior to arrival in Indianapolis.

“If a participant tests positive prior to arrival into Indianapolis, or is determined to be a close contact, they will be managed by the local public health authority and cannot travel to Indianapolis until their period of isolation or quarantine is completed.”

So a lot of this comes down to how many individuals are deemed “close contacts” of the person who tested positive, and also to how many might test positive before the Cavaliers team plane would be scheduled to depart for IND.

For instance, if a team such as UVa can assure the NCAA that it has five eligible players who would not fall into either of those categories, it still could be included in the field. And if some of those who are unable to make the initial trip fall only into the “close contact” category, it’s conceivable that group could make the trip at a later date — the timing dependent on what those “local public health” officials deemed necessary.

This is not necessarily a complication for the NCAA Tournament selection committee. It has set an 11 p.m. Saturday deadline for teams to inform the NCAA that their medical situation would not permit sending a team to Indianapolis.

That leaves plenty of time for committee members to adjust the seed list, if necessary, and to compile the official bracket when they commence work on Sunday.

There also is an established protocol if a team were to believe itself to be in position to travel for the tournament and then learn, just prior to departure or soon after arrival, that it had positive tests that would preclude it from competing. The NCAA will designate teams No. 69-72 as next in line should a team that was selected as an at-large entrant be forced to withdraw from the championship. So long as that occurs before March 16 at 6 p.m., the team or teams that would be next in line would be eligible to enter the tournament on the seed line to which the withdrawing team had been assigned.

The ACC has had a rough year in attempting to compete during the pandemic. According to research compiled by Taylor Eldridge of the Wichita Eagle, the ACC had completed 81.3 percent of its games with a week left in the regular season, 23rd among Division I conferences.

Virginia became the second ACC team in as many days to withdraw from the conference tournament. Duke did the same prior to a quarterfinal game against Florida State because of a positive test and subsequent contact tracing. The Blue Devils chose to end their season at that point. They would have been unlikely to be chosen for the NCAAs without further accomplishment in the ACC Tournament.

“I’m heartbroken for our student-athletes, coaches and support staff at both Duke and Virginia,” new ACC commissioner Jim Phillips said in a statement released to the media. “Our teams have worked incredibly hard and sacrificed so much throughout this season. We continue to be led by our ACC Medical Advisory Group and the protocols put in place that have allowed our teams to safely compete during the 2020-21 season. We will follow the lead of our medical personnel to ensure the health and safety of our programs remain the top priority. Our student-athletes and schools have been remarkable this entire season while enduring incredibly challenging circumstances.”

March 12, 2021 Basketball Comments Off on Virginia waits on its own NCAA bubble as COVID test knocks Cavaliers out of ACC Tournament
NFL News