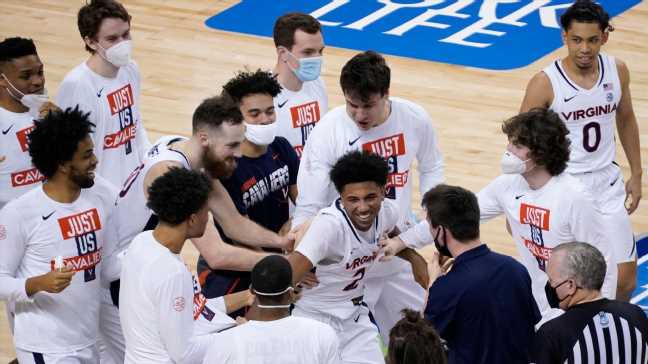 The Virginia men’s basketball team is out of the ACC tournament following a positive COVID-19 test within the program, the ACC announced Friday morning.

The Cavaliers were scheduled to play Georgia Tech in the ACC tournament semifinals on Friday evening after defeating Syracuse in the quarterfinals. Georgia Tech will now automatically advance to the ACC championship game on Saturday against Florida State or North Carolina.

“Obviously we’d prefer to win the game to advance to the finals,” Georgia Tech coach Josh Pastner said on the ACC Network’s Packer & Durham show. “But hey, it is what it is. We’ll have to be ready to play. You’re still playing for a championship.”

Virginia is the second ACC team in as many days forced to withdraw from the ACC tournament due to COVID-19 issues and contact tracing, after Duke left on Thursday morning.

While Duke athletic director Kevin White announced Thursday the Blue Devils’ season was over, that’s not necessarily the case for Virginia. To play in the NCAA tournament, a team needs to show seven consecutive negative daily tests before arriving in Indianapolis, then undergo daily testing while inside the controlled environment in Indianapolis.

Dan Gavitt, NCAA senior vice president of men’s basketball, has also said that a team just needs five healthy players to play in an NCAA tournament game. If Virginia doesn’t have a widespread COVID-19 outbreak and the rest of the team continues to test negative, the Cavaliers should be eligible to play in the NCAA tournament.

The Cavaliers, the ACC regular-season champions, are a projected 4-seed in the NCAA tournament in Joe Lunardi’s latest Bracketology.

“We don’t know the details of Virginia’s testing, therefore we don’t know the impact it may or may not have on our situation,” said Pete Moore, spokesman for Syracuse. “It’s safe to assume we did not have any positive tests prior to the Virginia game yesterday since all our guys were eligible to play.”

Pastner said his team has not been back to Atlanta since it left to play Wake Forest on March 4 to create its own bubble. He told his players they can go in elevators only with people in their bubble.

“You can do everything right and still get a positive … that’s what it comes down to,” Pastner said. “Can you get lucky enough to not get it?”

March 12, 2021 Basketball Comments Off on Virginia out of ACC tourney after positive test
NFL News