An old hand and a deft one came to the fore as the Australian Opals kept their medal hopes alive with a 69-54 win over Serbia on Sunday night.

Veteran centre Marianna Tolo gave the Opals the steady presence they needed as she was elevated to the starting line-up, while WNBA guard Bec Allen caught fire – scoring a team-high 16 points.

Tolo had 12 points, five assists and three steals but her presence made a noticeable difference to the side. 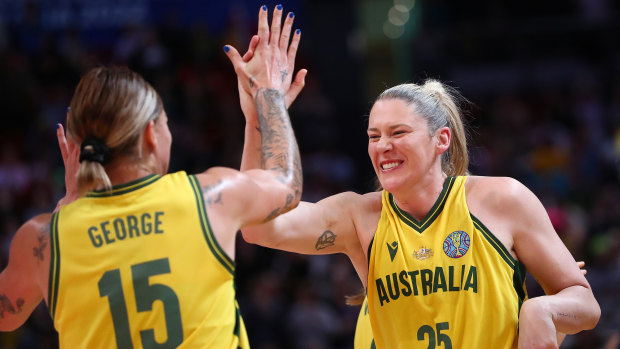 But Allen was forced from the game in the closing minutes in distress and clutching her abdomen after appearing to be winded or injured. She was taken from the court by paramedics but was upright and talking to them.

Australia will be desperately hoping she is able to recover in time to play in tomorrow’s game against Canada.

Shooting, unity and toughness were top of coach Sandy Brondello’s wishlist after the opening two games, and her side delivered against a team which finished fourth at the Tokyo Olympics.

Serbian star Yvonne Anderson had 14 points at half-time but was kept to just two points after that.

With their group growing ever tighter, a win was essential given the prospect of needing the tiebreaker over Serbia.

Allen poured in a three-pointer to start the game, while centre Tolo made the most of her promotion to the starting five, anchoring the defence before a late Lauren Jackson cameo helped the home side to an 18-10 lead at quarter-time.

The Serbians started the second quarter off strong, scoring two baskets in the first minute, but the Opals bounced back to build an 30-19 lead.

But Anderson again troubled the Opals’ defence, knocking down five late points to keep her side in touch at 36-28 at half-time. She had 14 points at the break. 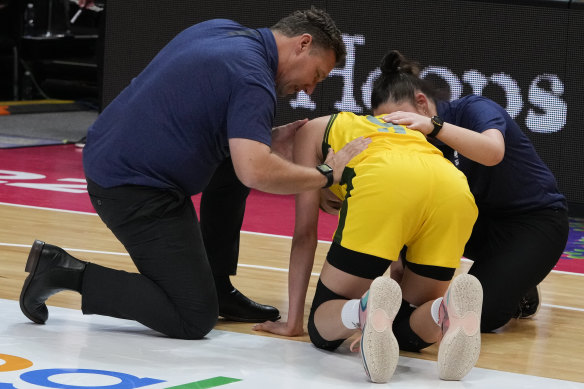 Bec Allen is attended to by medical staff.Credit:AP Photo

The Opals kept Serbia scoreless for the opening four minutes of the quarter, growing their lead to 18 points, but they lost point guard Sami Whitcomb, who suffered a bloody nose. But she would return and nail a three.

Serbia went on the attack, defensively, and their aggressive play paid off, going on a 7-0 run late in the quarter as Sasa Cado found her range from outside as the Opals led 53-43 going into the last term.

Allen and Tolo again came up with key baskets as Serbia continued to press and trap, but it came to little as they took home a vital win.

After the game, Tolo added a little more insight about Allen’s injury.

“Bec got crunched with a knee to the ribs – it looked like she was in pain, and I hope she is OK,” Tolo said.