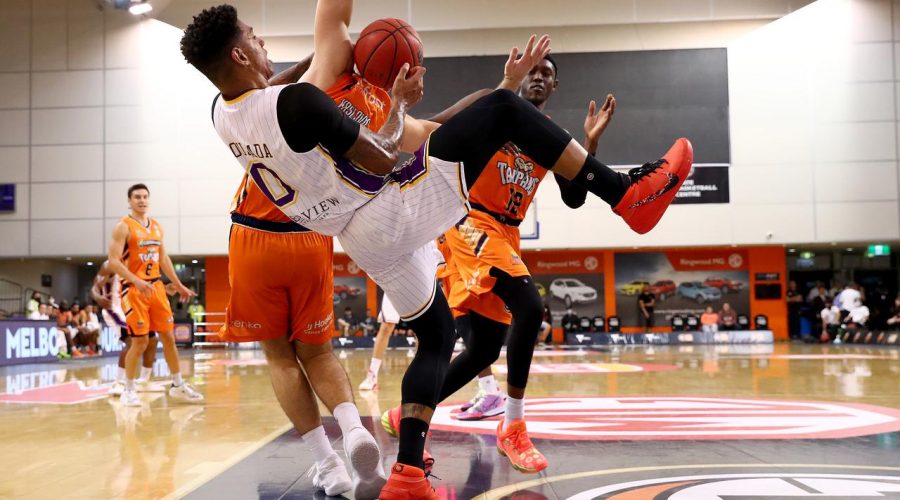 The NBL has taken the extraordinary step of threatening fines and demanding players don’t talk about issues like the slippery on-court sponsor stickers which they believe create a serious safety issue.

The league’s slippery decals have dominated conversation all season, with several players slipping and calling for change.

The Players’ Association and the NBL are currently working through the issue, but there has been no solution.

The league receive a significant financial boost from on-court sponsorship, but at present the stickers are compromising player safety.

The @NBL has addressed the decal issue by informing clubs all players and club officials will be FINED if they make any more comments about falling on decals. @NBL funded media have also been told not to discuss the issue.
If we don’t talk about it, it didn’t happen.

“This league is kidding me – they don‘t care about the players… that’s my thoughts,” Louzada tweeted.

“I‘m tired of being silent.”

The players’ passionate stance on player safety has prompted the NBL to muzzle its players.

Club officials have confirmed to the NCA NewsWire they have received correspondence from the NBL asking them not to publicly address issues that bring the game into disrepute like officiating and the decal issue and that fines could be enforced if they do so.

Australian basketball great, and former Sydney Kings big man, confirmed the players had been muzzled by the league.

“The NBL has addressed the decal issue by informing clubs all players and club officials will be FINED if they make any more comments about falling on decals,” Bogut tweeted.

“NBL funded media have also been told not to discuss the issue. If we don’t talk about it, it didn’t happen.”

It comes as Brisbane Bullets star Nathan Sobey urged the NBL to put player safety before profit and fix the slippery decals.

Sobey is annoyed that the Players‘ Association and players have pushed for change, but nothing has happened.

“If people don’t understand that the players are the ones that are going to make you money with the product they are putting on – it is pretty self-explanatory,” Sobey said.

“Players getting hurt should come first before anything, otherwise there is going to be no games to put that sort of revenue into.

“The players have preached that and not much is changing, so there isn’t much we can do from continuing to raise the issue.

“I know the Players’ Association are trying as hard as they can, but nothing has changed it and we’ve heard from a lot of people about how unsafe they are.”

March 5, 2021 Basketball Comments Off on The NBL is demanding its players don’t talk about the issues like the slippery on-court sponsor stickers
NFL News