Giannis Antetokounmpo could only watch. 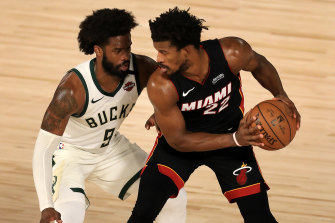 The fifth-seeded Heat finished off an upset of the NBA’s best regular-season team Tuesday, topping the Milwaukee Bucks 103-94 in game five of their East semi-final series — while Antetokounmpo, the league’s reigning MVP, couldn’t play because of a sprained right ankle.

Butler and Goran Dragic each scored 17 points for the Heat, who won the series 4-1 and will face either Boston or Toronto when the NBA’s final four gets under way next week. It's Miami's first time in the East finals since 2014, and the first time Butler has made it to the NBA's final four.

Khris Middleton had 23 points for Milwaukee, who had 15 points and 14 rebounds from Brook Lopez. Donte DiVincenzo scored 17, Wesley Matthews and Marvin Williams each had 11 and Eric Bledsoe had nine assists for the Bucks. 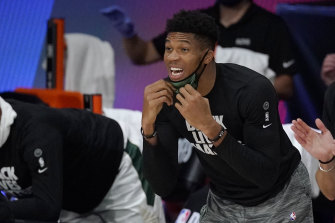 Injured league MVP Giannis Antetokounmpo did what he could from off the court for Milwaukee.Credit:AP

Antetokounmpo did what he could — cheering from the bench throughout, rebounding for teammates during pre-game warm-ups and again at half-time, offering words during time-outs.

And the Bucks were inspired from the jump.

But the NBA's No. 1 overall seed in these play-offs — a league-best 56-17 in the regular season — just didn't have enough.

Milwaukee opened the game on a 28-15 run, putting Miami on their heels from the opening minutes. DiVincenzo got the call to start for Antetokounmpo and scored eight of Milwaukee’s first 16 points, Matthews had nine by the end of the quarter and the Bucks were off to a promising start.

Milwaukee wouldn’t let the Heat get away, though – not then, and not in the third when Miami pushed the lead out to 12 after a 3-pointer by Crowder with 3:07 left. The Bucks needed just 50 seconds to rip off seven straight points, and it stayed close from there.