Jock Landale talks a big game but plays an even bigger one.

The Melbourne United centre, who this week earned NBL All-Star selection in his debut season, is comfortable in his own skin and hopes to play out of it when the grand final series against Perth Wildcats tips off on Friday night. 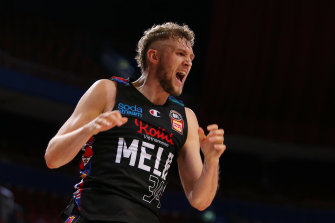 Among Landale’s bold statements was his prediction that United would go through the season undefeated.

And while that hasn’t happened, the 25-year-old has backed up his talk with actions. With United down by 17 points in Tuesday’s deciding semi-final against SEM Phoenix, he took his side on his back with a game-high 27 points.

Landale credits his partner of a year, India, and Australian basketball great Andrew Bogut with his success since returning to Melbourne after playing in Europe and missing out on an NBA contract.

“My off-court life is set up so well. I’ve been amongst great guys, reconnected with a lot of my friends, played in front of family again and that’s been incredible,” he said.

“I’ve had a taste of what it’s like to play in this league and loved it. It’s something I always wanted to do and winning a championship was top of the list. It’s been tough at times, the expectations and sometimes I felt like I wasn’t living up to them. I’ve preached all year about us needing an unselfish culture and keeping that in mind has helped me relax a little and not feel an immense amount of pressure everyday like I would.”

“Everything I do is structured around basketball and the drive I have. India’s made the process so much more enjoyable and been a massive part of me loving this year. If I’ve had a bad game I come home and we end up laughing about it. I would never have done that, a bad game would’ve absorbed me until the next.

“My expectations are higher than anyone else’s, that will never change, she just helps me manage them.” 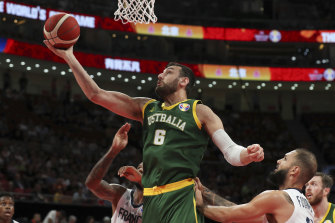 Bogut, Landale says, “mentors the crap out of me. The whole year he’s been in my ear, it’s been unbelievable”.

“Growing up he was my biggest idol. I went to his academy, I was a fan boy, bought his jersey. We get along like a house on fire, we’re cut from similar cloth.

“Every single game he’s throwing some piece of advice at me, bantering about some guy who might have got the better of me on a play. That dude’s got my back.”

Landale, who is in the Boomers Olympic squad that was trimmed to 19 players on Thursday, said United are not satisfied with making the grand final.

“The option came up to go out and have a beer together and celebrate what we’ve accomplished thus far and there were no takers. Everyone was like, ‘Nah we’ve got a series coming up in two days, we’ve got to look after our bodies and get a decent night’s sleep’,” he said.

“That level of professionalism snapped everyone out of ‘Hey, life’s good, we’re in the grand final’. We don’t want to just make it; we want to win.”

July 3, 2021 Basketball Comments Off on ‘That dude’s got my back’: How Bogut helped Melbourne United centre become an All-Star
NFL News