New Zealand proved far too experienced as they beat the Australian Boomers in their opening FIBA Asia Cup qualifier in Brisbane on Thursday night. 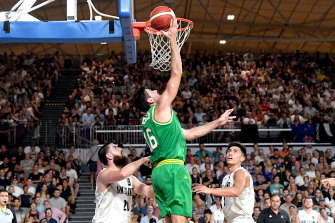 Todd Blanchfield drives to the basket for the Boomers.Credit:Getty Images

The loss will sting the Boomers but they have five more group games and need to finish in the top-two of their four-team group to qualify for the 2021 Asia Cup. The win was new Tall Blacks coach Pero Cameron's first since taking over from Paul Henare.

Todd Blanchfield led Australia with 17 points while Kyle Adnam had 12 points off the bench in his debut. Sydney Kings coach Will Weaver led the Boomers as new coach Brett Brown was unavailable due to NBA commitments.

Australia plays Hong Kong in Brisbane on Sunday while the Tall Blacks will visit Guam on Sunday for their second game.

The Boomers started their five most experienced players and made a 9-0 start behind Nathan Sobey and Blanchfield. 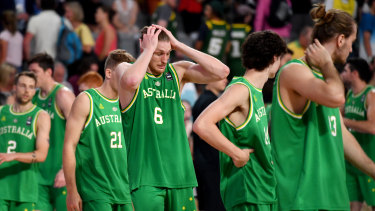 The Boomers react to the loss.Credit:AAP

But the Kiwis had more of their regular players and international veterans such as Ili and Te Rangi soon came to the party, cutting the lead to 31-27 at quarter time.

Those two Tall Blacks took over in the second term, taking their tallies past double figures as young Boomers continued to turn the ball over, falling 53-46 behind at half-time. Sunday Dech’s last-second three was a highlight.

Ili, Ngatai and Te Rangi were too much for the Boomers to handle in the second half as they repeatedly found openings and exploited turnovers from the Boomers.

Debutante Adnam gave his side a spark with five points to start the final term but they would be held at bay, Loe's late three ended a late Boomers comeback.

The likes of Adnam, Angus Glover and Dech showed they are worth persisting with for the Boomers who will be better for the run and unlikely to repeat their 17 turnovers when the two sides meet in New Zealand late this year.