Australian NBA star Ben Simmons will undergo lower back surgery to alleviate pain caused by the herniated disc that has prevented him from suiting up.

The 25-year-old Brooklyn Nets playmaker faced a flurry of questions from commentators and fans when he didn’t play for the Nets in their first-round playoff exit against the Boston Celtics due to back issues and ongoing mental health issues, with some questioning his “competitive fire” among other insults.

But the Nets announced on Thursday AEST that Simmons would have a microdiscectomyand he would face a recovery of three to four months which will basically take up his whole off-season. 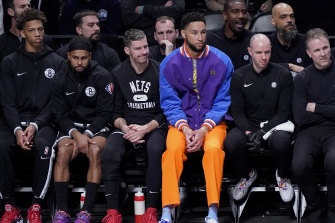 Ben Simmons on the Nets bench.Credit:AP

The Nets said Simmons and the team spoke with multiple back specialists before making the decision and he should be back to full fitness for a training camp in September.

One thing to note about a microdiscectomy is that it is used to relieve pain but doesn’t address the issues that cause a herniated disk, so Simmons will need to also work with his trainers and doctors to figure out how he can reduce those stresses on his back heading into next season and beyond.

San Antonio Spurs chief executive R.C. Buford will be in attendance for game one of the NBL grand final series on Friday night.

Buford is a two-time NBA executive of the year winner when he worked with coach Gregg Popovich in assembling the teams which won five NBA championships and were perennial contenders.

A number of Australians were part of those teams or the Spurs coaching staff or front office such as Patty Mills, Aron Baynes, Andrew Gaze, Shane Heal, Brett Brown and Matthew Nielsen. Most recently, Jock Landale played with the Spurs.

Buford is the father of Sydney Kings coach Chase Buford who has led his club to the NBL grand final series in his first season in charge.

The Kings have already sold more than 10,000 seats for game one and could potentially have an even bigger crowd for game three of the best of five series on Wednesday.

The JackJumpers also sold out Hobart’s 4500-seat MyState Bank Arena for game two on Sunday with the club apologising to those who missed out on tickets and promising to arrange for several live viewing sites around the state.

Network 10’s main channel will show game two on Sunday in a new format called NBL Sprint which will start an hour after tip-off, show highlights of the first three quarters and then show the last quarter live.

Channel 10 Peach will show the full game live, as will ESPN and Kayo Freebies – those three channels will show the other games of the series live.

Brian Goorjian hinted his time as Illawarra coach in the NBL could be finished and he confirmed this week he would be passing the role to long-time assistant coach Jacob Jackomas.

Goorjian also confirmed he would coach the Boomers for next year’s FIBA World Cup and the 2024 Paris Olympics – welcome news as the national team seeks to build on its bronze medal in Tokyo.

The six-time NBL title winner coached the Hawks for the past two seasons and took them to the finals in both campaigns but he opted not to take up a third-year option.

Instead, Goorjian will be a remote special advisor to the Hawks and is entertaining offers from overseas clubs, especially those in Asia, to coach them next season.

“Basketball in this country is as strong as I’ve seen it, which is saying a lot as I started coaching here in the NBL in 1988,” Goorjian said.

“Full credit to Larry Kestelman and the NBL office, for their superb job, particularly over the past two years with managing all the disruptions caused by COVID-19.”

Jackomas, who has worked under Goorjian for over a decade in both China and Australia, coached the Hawks to a 92-77 win over Melbourne United on March 27 when Goorjian was in isolation after testing positive for COVID-19 and he showed good instincts in that game focusing on his team’s defence and letting his veterans lead the offence.

The WNBA tips off on Saturday AEST and several Australians are still in the running to start the new season in the US league.

WA rookie guard Amy Atwell was still on the roster for the Los Angeles Sparks as of Thursday afternoon and would be a great success story should the sharp-shooter start the season alongside Liz Cambage.

Atwell shot a perfect six of six from the three-point line to finish with 19 points in an 87-84 preseason win over the Phoenix Mercury on Monday AEST.

Sparks coach Derek Fisher said post-game Atwell as one of the players who had done “everything she could” to make the roster.

Opals forward Alanna Smith looks to be doing well with the Indiana Fever starting in the preseason win over Chicago Sky and posting six points and five rebounds in 12 minutes while Steph Talbot and Ezi Magbegor both started for Seattle Storm in their preseason win over Phoenix last week.

Teams can still waive players in the coming days and trade, waive or sign new players during the season but getting to the first game is a big achievement for any WNBA player.

May 5, 2022 Basketball Comments Off on Simmons faces lower back surgery over herniated disc
NFL News