Philadelphia: With the NBA trade market at full speed, the draft behind them, and free agency set to begin on Saturday (AEDT), what's next for Ben Simmons at the 76ers?

The Sixers made two roster-reshaping trades in addition to selecting three players in Thursday’s NBA draft. In addition to dumping Al Horford's salary, the Sixers were determined to improve the team fit by acquiring sharpshooters Seth Curry and Danny Green. Daryl Morey, the new president of basketball operations, made the moves to create the floor spacing for All-Stars Simmons and Joel Embiid. 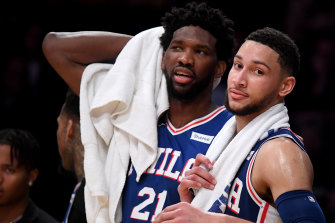 Maybe that's a good thing, considering the Rockets are comfortable at this time to see if they can work things out with Harden, who has two years remaining on his contract.

But Morey spoke of Simmons as if the third-team All-NBA point guard would be a major part of the Sixers future. That's why it was important to add the much-needed sharpshooters.

They agreed to trade Horford, a 2025 protected first-round pick, the 34th pick in the NBA draft and the rights to Serbian point guard Vasilije Micic to the Oklahoma City Thunder in exchange for Green and Terrance Ferguson. The Sixers later shipped Josh Richardson and the 36th pick to the Dallas Mavericks for Curry. And with the 48th pick they drafted former Arkansas sharpshooter Isaiah Joe.

"Honestly, if you go back, it's completely insane how good some of these Joel and Ben line-ups were," Morey said of when they were surrounded with shooters during the 2017-18 season.

"My analysis is pretty terrible in general, but when you get to like 1200-minute line-ups that are playing out historically great ability to build a lead … it became pretty obvious [adding shooting] was the right path for the roster."

The Sixers concluded the 2017-18 regular season with a league-record 16 consecutive wins en route to 52 overall. They had sharpshooters Robert Covington and JJ Redick in the starting line-up. Ersan Ilyasova and Marco Belinelli were the first two players off the bench after being acquired in the buyout market. Those four created spacing for Embiid and Simmons.

"It was a big day for everyone in the Sixers franchise," Morey said of the draft. "I think the big important thing is our top players are thrilled and energised and ready to come in. That goes a long way with the roster."

Meanwhile, the Golden State Warriors' All-Star guard Klay Thompson will miss the NBA season after tearing his right Achilles tendon during a practice game on Thursday, the team confirmed. 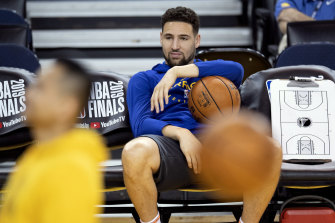 The Warriors’ Klay Thompson will miss the next NBA season with an Achilles injury.Credit:AP

The sharp shooting 30-year-old missed all of last season with a torn left anterior cruciate ligament that he suffered during the NBA finals last year and the three-time NBA champion was poised for a big season alongside fellow "Splash Brother" Stephen Curry.

November 20, 2020 Basketball Comments Off on Simmons, Embiid are 76ers’ core and new boss wants it stay that way
NFL News