The Australian Opals have called in three WNBA stars for the start of their Tokyo Olympics qualifying campaign.

The Opals begin their FIBA Asia Cup in Bengaluru, India on Tuesday and need to make the top four to progress to the Olympic qualifying tournaments this February.

Newly crowned WNBA most improved player, Leilani Mitchell, New York Liberty forward Rebecca Allen and Minnesota Lynx guard Stephanie Talbot have all come straight from their US season to join up with the Opals as has coach Sandy Brondello after her Phoenix Mercury side were eliminated from the play-offs. 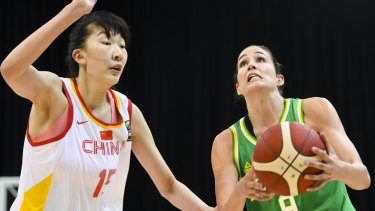 Key figure: Rebecca Allen of the Opals lines up a shot against China during a FIBA Asia Cup warm-up match in Canberra.Credit:AAP

FIBA World Cup captain Jenna O’Hea is back with the side, Abby Bishop has also made her return to the national team while WNBL stars Katie Ebzery, Sara Blicavs, Ezi Magbegor and Cayla George should also play key roles.

Liz Cambage is unavailable because she is still playing with the Las Vegas Aces in their WNBA play-off series with the Washington Mystics.

The Opals tuned up for the Asia Cup with a training camp and two wins over China in Canberra last week including a 98-63 win in the second game.

Brondello said the Opals must be ready to adapt to the grind of the Asia Cup.

"It's just a valuable experience for us going into Asia Cup because every team is different," Brondello said.

"Japan will be a little bit different, too, so it's about us being able to adapt on the fly."

The Opals will play the Philippines, China and New Zealand in Group B while Japan, Korea, Chinese Taipei and India are in Group A. 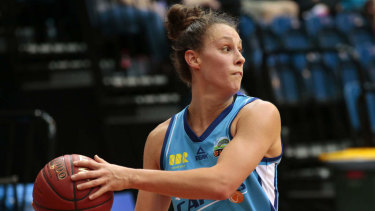 Transcontinental: Stephanie Talbot has come straight from the US to join the Opals.Credit:Jeffrey Chan

Japan will play in the event and the qualifying tournament but will automatically qualify for Tokyo due to being the host nation.

The Opals' campaign begins against the Philippines on Tuesday at 5.45pm followed by games against New Zealand on Wednesday at 5.45pm and China on Thursday at 8pm. Fox Sports will show all Opals games live.

The crossover games will be held on Friday followed by the semi-finals on Saturday and the final on Sunday.

Both Australia and New Zealand feature a number of WNBL players and coaches and they face a tight turnaround with the new season tipping off on October 11, just over two weeks after the tournament ends.