The owners of The Hawks have challenged local fans to show the NBL the 'Illawarra' name should be restored by pledging their support for the team.

The NBL foundation club has struggled commercially for several seasons and was sold to new owners earlier this year without the Illawarra name as the league is convinced the franchise needs to attract fans from outside its traditional Wollongong area fan base. 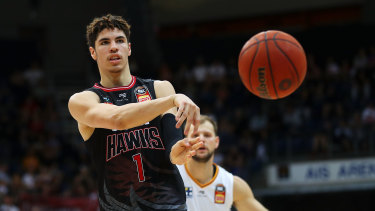 Import and NBA hopeful LaMelo Ball made a splash in the NBL with the Hawks last year.Credit:Getty Images

This is the second time the Illawarra name has been dropped with the team playing as the Wollongong Hawks from 1998-2015.

Now co-owner and team president Dorry Kordahi has challenged fans to surpass 4379 members and called on Illawarra businesses to take up club sponsorships.

Local fans have expressed fury about dropping the Illawarra name amid fears it will lead to the team being moved closer to Canberra or closer to Sydney.

Some fans have also raised issues with ticket prices for this coming season considering the NBL has yet to confirm if they will be playing at home venues or in a hub.

The NBL will take some convincing to reinstate the name given the potential to earn new support in bigger locations.

With Hall of Fame coach Brian Goorjian signing on as coach and Kordahi and NBA executive Bryan Colangelo leading the ownership group, the Hawks have the highest credentialed leadership they have had in years.

They have also signed an exciting roster with recent NBA forward Deng Adel and Rio Olympian Cam Bairstow among the new signings.

"The Illawarra is in the Hawks' DNA. It’s a fundamental part of the club's identity and history and must be part of its future," Kordahi said.

"The Illawarra is a proud region built on hard work and people pulling together to support each other. And it’s time to show that pride and get behind our campaign to put the Illawarra back into the Hawks.

"We need to demonstrate to the NBL that this is a long term, sustainable club and business that deserves to have Illawarra in its name. But we need the support of the Illawarra community to achieve this."