New Zealand Breakers import Glen Rice jnr has pleaded not guilty to a single charge of injuring with intent when he appeared in an Auckland court.

The son of three-time NBA All-Star Glen Rice was released on bail and is to appear in court again in February. 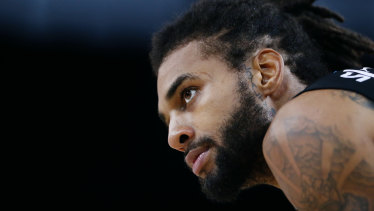 Glen Rice jnr pleaded not guilty and will appear in court in February.Credit:Getty Images

Rice was arrested last week after an incident outside an Auckland bar. His lawyer lodged the not guilty plea and elected a trial by a judge, rejecting a jury trial.

The charge carries a maximum penalty of five years in prison.

Rice's arrest came only days after he joined the Auckland-based Breakers as an injury replacement.

The NBL has since ordered Rice's suspension, and the club has complied.

Breakers owner and CEO Matt Walsh attended court with Rice and spoke to reporters outside the courtroom. Rice stood next to Walsh dressed in a charcoal suit, blue shirt and pale grey tie, and refused to comment.

"We are going to let it play out in the New Zealand law system," Walsh said. "While that happens we are going to continue to support Glen and, like anyone else going through this process, just keep an open mind and see how it plays out."

Rice attended Georgia Tech but was dismissed by coach Brian Gregory in 2012 after multiple suspensions, the last involving a shooting outside an Atlanta nightclub.

He was taken by the Philadelphia 76ers with the 35th pick in the 2013 draft but later traded to Washington. He was waived by the Wizards in January 2015.