Luka Doncic poured in a career-high 42 points, grabbed 11 rebounds and recorded 12 assists to lead the Dallas Mavericks to a 117-110 win over the visiting San Antonio Spurs on Monday for their second straight victory.

The triple-double was the 20-year-old Doncic's league-leading sixth of the young season. He became just the second player, after LeBron James, to record a 40-point triple-double before the age of 21 in NBA history. 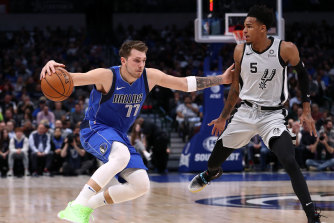 Dorian Finney-Smith's lunging shot after a wild scramble barely beat the shot clock to push Dallas' lead to 112-107 with 1:14 to play. Rudy Gay's 3-point jumper with 43.6 seconds to play brought the Spurs back to within two points, but Doncic answered with a 3-pointer 16 seconds later that cemented the game for the Mavericks.

Finney-Smith had 22 points for Dallas, Kristaps Porzingis added 18 points and 10 rebounds, and Jalen Brunson scored 11 points in the win.

DeMar DeRozan scored a season-high 36 points for the reeling Spurs, who lost their sixth straight game. San Antonio hadn't lost that many in a row since the 2010-11 season, when it dropped six straight in March and April. The Spurs went on to finish that regular season with 61 wins.

Doncic was on fire from the opening tip, scoring 17 points in the first quarter on 5-of-7 shooting that included making 4 of 6 attempts from beyond the arc. He had 24 points at half-time.

The Suns lost star point guard Ricky Rubio to back spams shortly beforehand, then lost their match 99-85 in Phoenix on Monday night.

Boston (11-2) had a 10-game winning streak snapped on Sunday by the Sacramento Kings but bounced back with a relatively easy road victory as Jayson Tatum scored 26 points and Kemba Walker added 19.

In Utah, Dante Exum played his first game for the season after knee surgery in March, scoring two points in 14 minutes as the Jazz lost 112-102 to Minnesota. Karl-Anthony Towns matched his career high of seven 3-pointers and contributed 29 points and 13 rebounds for the Timberwolves.

In New York, the Knicks were far too good for Cleveland, running out 123-105 winners. Matthew Dellavedova scored five points in 12 minutes for the Cavs, who dropped to 4-9 for the season.