The Dallas Mavericks have snapped Los Angeles Lakers' 10-game winning streak in the NBA with a 114-100 victory.

Luka Doncic scored 21 of his 27 points in a dynamic second half as the Mavericks underlined their growing status as contenders with Sunday's road win at the western conference leading Lakers.

Doncic also had 10 assists and nine rebounds while Delon Wright had 17 points and nine assists. 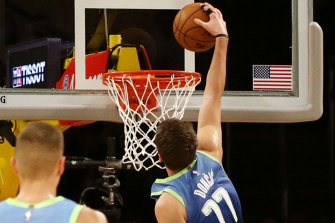 Dunk: Luka Doncic is proving a force to be reckoned with. Credit:Getty Images

Dallas won for the seventh time in their past eight games to improve to 13-6 and sit fourth in the western conference.

Anthony Davis had 27 points and 10 rebounds for the Lakers while LeBron James had 25 points, nine rebounds and eight assists.

The Lakers are 17-3 for the equal-best record in the NBA with eastern conference leaders Milwaukee Bucks.

The Mavs erased a half-time deficit with a 28-5 run to open the second half, shredding the Lakers' usually solid defence.

The decisive rally was led by a majestic quarter from Doncic, who had 16 points and five assists in the third quarter.

"It's a great win that means a lot to us," Slovenian Doncic said.

"It shows that we can play against big teams, too. We just need to keep it rolling." 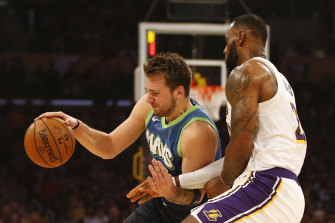 Pascal Siakam scored 35 points while Fred VanVleet had 21 points and 11 assists as Toronto Raptors used a record-setting first half to rout Utah Jazz 130-110.

The NBA champions led 77-37 for the biggest half-time lead in franchise history and in the NBA this season.

The 40-point spread was the Jazz's biggest half-time deficit.