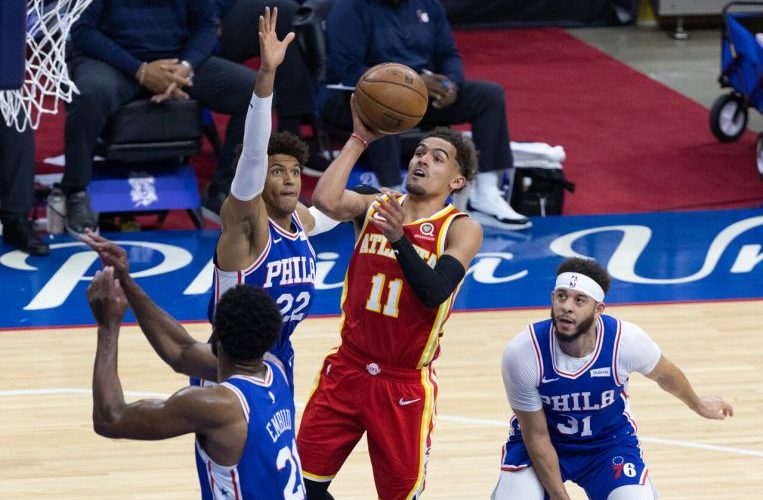 Roared on by a raucous home crowd, the Sixers appeared to be poised to claim a 3-2 advantage in the best-of-seven series after surging into a 26-point lead early in the second half.

But a magnificent Atlanta offensive performance led by Young saw the Hawks steadily chip away at the deficit.

Young then nailed a floater to make it 104-102 before drawing a foul to earn three free throws which he promptly drained to give the Hawks their first lead of the game at 105-104 with 1min 26sec remaining.

Danilo Gallinari’s fadeaway put Atlanta 107-104 ahead and the Sixers’ fate was sealed when Joel Embiid missed two late free throws that could have put Philadelphia back within striking distance.

Instead, Atlanta regained possession and two more free throws from Young extended the Hawks lead to make the game safe.

The win means the Hawks can clinch a series victory in front of their home fans on Friday when game six heads back to Georgia.

“We just kept fighting,” Young said afterwards. “We have confidence in each other. We’re, we’re a great group, good to be around.

“We all love you to each other’s company and it shows on the court and we never stopped believing until the final buzzer.”

That belief has left the fifth-seeded Hawks now on the brink of a place in the Eastern Conference Finals, a remarkable turnaround for a team that axed head coach Lloyd Pierce on March 1.

Under interim coach Nate McMillan, the Hawks surged in the standings to secure a play-off spot and Young has blossomed with the support of the Atlanta caretaker.

“It’s great that I have a coach that trusts me,” Young said on Wednesday. “I still have a lot to learn a lot to get better at.

“But I feel that right now we’re in a good place and we just got to keep winning and keep believing in each other.”

Young was backed by John Collins with 19 points, while Gallinari added 16 points and Lou Williams 15.

Philadelphia, who piled on 38 points in the first quarter alone, were led by Embiid with 37 points while Seth Curry had 36 points. No other Philadelphia player made double figures.