Dejan Vasiljevic, despite getting plenty of recent practice, isn’t much of a spectator.

In his first season in the harbour city, Vasiljevic appeared on track for rookie-of-the-year honours when a ruptured Achilles tendon prematurely ended his campaign.

“I was watching games where we just missed the playoffs, that was the hardest thing,” Vasiljevic said.

Vasiljevic won’t quite be back for the start of the NBL season, which is due to tip-off on Friday night. The Kings had a major disruption to their preparation on Saturday after their NBL Blitz clash with the Illawarra Hawks scheduled for Saturday night in Wollongong was cancelled due to a positive COVID-19 case.

The positive case attended Hawks training earlier this week which makes the whole team close contacts forcing them to undergo isolation as per the NSW Health protocols. All Hawks players and staff are double-vaccinated.

Vasiljevic, a University of Miami product, headed back to the United States to complete his rehabilitation in the off-season, where he was again consigned to spectator status. This time it was watching the Boomers make history as the first Australian men’s basketball team to win a medal at the Tokyo Olympics. The 24-year-old’s celebrations didn’t endear him to his neighbours.

“There were a lot of noise complaints,” Vasiljevic said. “It was about 5am or 6am in the morning and I’m screaming, the time difference didn’t really help.

“It was sick. You sit there and watch the Boomers finish fourth on multiple occasions, but I knew Patty Mills and Joe [Ingles] weren’t going to let another fourth-placed finish happen. It was unbelievable.” 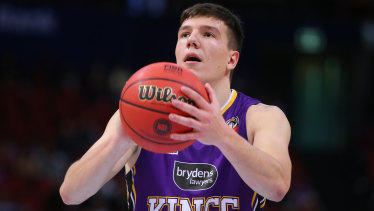 Dejan Vasiljevic is a rising star for the Sydney Kings.Credit:Getty

Once he recovers from his injury – Vasiljevic expects to be back on court with the Sydney Kings by December or early January – it will be only a matter of time before the shooting guard becomes a part of the national program.

In his 21 NBL appearances in the purple and gold before injury struck, Vasiljevic showed why he’s a star on the rise. The shooting guard averaged 15.4 points and 3.6 rebounds per game while shooting 46.5 per cent from the field and 41.5 per cent from three-point range.

Yet had it not been for COVID-19, Vasiljevic would instead have been plying his trade in Europe or even the NBA.

“I had nine to 12 NBA teams interested in working me out after my college season,” he said. 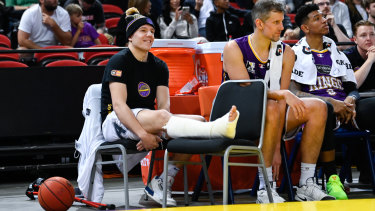 “It just didn’t pan out and Europe didn’t know how their season was going to pan out after COVID.

“I came to the NBL to sign with the Kings because there was a guarantee we were going to play, Australia was doing well in keeping the cases to a certain number.

“I signed here and am forever grateful for it.”

The Kings signed Vasiljevic on a three-year contract, but further NBA interest is likely to come his way before he completes it.

“I want to see myself next year or the year after in the NBA,” he said. “The best possible situation is to do it with the Kings. We’ve got the best gym and high-performance staff, we’ve got great coaches in Chase Buford and Kevin Lisch as well. I’m in great hands here with the Kings.

“When I was 15 or 16 I had the ambition to make basketball my job and play as long as possible. Why not try to make it to the NBA?

“If I make it I will be very fortunate that the hard work has paid off. Once you make it to the NBA, that’s when it goes to another level and you have to stay there.

“A lot of guys get drafted and play one or two years and then never make it back to the NBA. Once you’re there, you’ve got to stay with it. That will be my goal if I make it.”

Vasiljevic has already made his mark in the United States. His stint with the Miami Hurricanes was a successful one; he became a thousand-point scorer, made two trips to the NCAA tournament and was ranked second all-time for three-pointers made.

While in college, he also learnt to cook and clean for himself en route to earning bachelor degrees in business management and economics, as well as a masters in science and physical education.

He has put some of those skills to good use during his sabbatical, launching his own clothing brand and is preparing to run an academy to encourage kids out of lockdown and into basketball.

His immediate focus, however, is to get back on court with the Kings and press for a Boomers spot.

“I’ve represented Australia before, it’s always an honour to wear the green and gold,” he said.

“I won a few medals myself at a high level so why not try to do that with the Boomers, take it to the next step with a silver or gold.”