The NBA finds itself caught between two cultures, after a tweet about Hong Kong protests sparked criticism from China that threatens the US basketball league's expansion efforts in its most important international market.

The controversy erupted after Daryl Morey, general manager of the Houston Rockets, one of the most popular US basketball teams in China, appeared to support Hong Kong demonstrators in a tweet late on Friday. While the message was deleted and both Morey and the National Basketball Association tried to distance themselves from it, the damage reverberated across both China and the US. 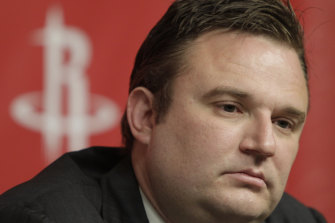 Daryl Morey: “I did not intend my tweet to cause any offense to Rockets fans and friends of mine in China.”Credit:AP

For the Chinese, the incident is seen as the latest example of a Western organisation challenging the nation's sovereignty over its territory. In the US, meanwhile, the NBA's response was met with scorching bipartisan criticism from politicians including Senator Ted Cruz. The situation puts the league at risk of either offending fans in its biggest international market, or exposing itself to charges of kow-towing to China at the expense of American values.

"Chinese Rockets fans are first Chinese. We love Chinese red more than Rockets red," Kang Hui, an anchor for CCTV News Channel, said in a video on an official CCTV Weibo account. "Morey, this time you really fouled. If you foul, you have to pay the price."

At stake is a business that has been notching double-digit growth in China every year since 2008. The league has achieved the kind of success there that other international sports leagues covet. About 800 million Chinese watch NBA programming on TV, digital media or smartphones in a season, with top games attracting more viewers than in the US.

The NBA has a host of licensing and retail deals in China, including a $US500 million ($741 million) pact with Tencent Holdings and a 30-plus-years partnership with state-run broadcaster CCTV. Tencent has seen internet viewership of NBA games nearly triple over the past four years. 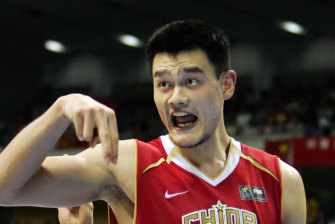 China’s Yao Ming during his time at the Houston Rockets.Credit:AP

The CBA, in a statement on Sunday on its official microblog account, said the association is "strongly opposed" to Morey's comment and will halt communications and cooperation with the club. It canceled four games with the NBA minor league scheduled for later this month.

Hu Xijin, editor-in-chief of the Global Times, a tabloid run by the People's Daily, the Communist Party's flagship newspaper, laid out the Rockets' dilemma in a tweet:

"Daryl Morey has the right to express his values, and Chinese fans of the Houston Rockets have the right to abandon this team," he wrote.