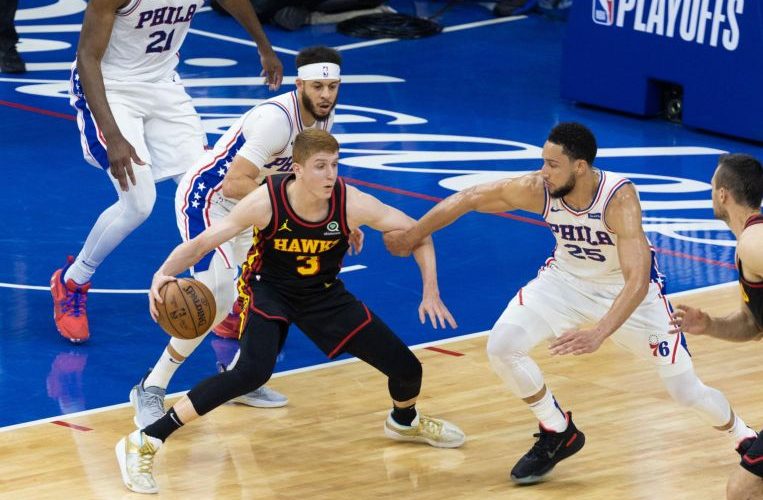 LOS ANGELES (AFP) – Kevin Huerter scored a play-off career-high 27 points as the upstart Atlanta Hawks punched their ticket to their first Eastern Conference Finals in six years on Sunday (June 20), with a 103-96 Game 7 win over the Philadelphia 76ers.

All-star Trae Young finished with 21 points and 10 assists, John Collins had 14 points and 16 rebounds and Danilo Gallinari came off the bench to score 17 points for the Hawks, who won three games in Philadelphia to take the series 4-3.

“Winning Game 7 is a treat for us,” said Huerter.

“We are a little naive. We always believe we can win.”

The Hawks will now face the Milwaukee Bucks in Game 1 of their series on Wednesday as both NBA semi-finals are now set. The Phoenix Suns have a 1-0 lead over the Los Angeles Clippers in the Western Conference Finals.

The Hawks had surprised by dispatching the New York Knicks in five games in the opening round.

They needed a balanced offence in Sunday’s winner-take-all contest, and 22-year-old Huerter needed to shoot well because of all the injuries in their line-up – they were without De’Andre Hunter, who had a right-knee injury.

After the game, Young slipped off his jersey and went up into the stands at Wells Fargo Center to hand it to his father for Father’s Day.

“A winning jersey. I wanted to win it for my dad,” he said.

Joel Embiid scored a game-high 31 points and grabbed 11 rebounds for the Sixers. But he also committed eight turnovers, including a key wobble with 41 seconds left in the fourth quarter.

Game 7 was a see-saw contest with 20 lead changes and 19 ties, but the turning point came in the final minute of the fourth.

Embiid’s turnover was preceded by a costly foul by reserve guard Matisse Thybulle which sent Huerter to the foul line for three shots. Huerter made all three to boost the lead to 96-92 and the Hawks held on from there.

“We felt like this was going to be our year. It sucks. There is a lot to regret,” Embiid said.

Elsewhere, Devin Booker delivered a 40-point triple-double as the Suns shook off some play-off rust to beat the fourth-seeded Clippers 120-114 in the opening game of the West Finals earlier on Sunday.

Booker also had 13 rebounds and 11 assists for his first career triple-double as the Suns won despite the absence of all-star guard Chris Paul, who has been quarantining due to the NBA’s Covid-19 health and safety protocols.

“I’m just going out there to win every game possible,” said Booker.

“I’ve been saying this since the start of the play-offs – every next game is the biggest game.”

The Suns’ Jae Crowder said it was fitting that Booker put on a show in front of the crowd of 16,583 at Phoenix Suns Arena.

“I expect it. I know the type of player he is,” Crowder said.

Game 2 is scheduled for Tuesday night in Phoenix.

This is an unexpected NBA final four match-up between two franchises trying to cap their storybook seasons by winning their first NBA title. The Clippers have never been to the Conference Finals before and the Suns last made it in 2010.

This was the Suns’ first game since last Sunday when they completed a four-game sweep of the Denver Nuggets in the second round.

It is their ninth trip to the Conference Finals as they seek their first title in their 53-year history.

For the Clippers, Paul George scored 34 points, Reggie Jackson had 24 points and DeMarcus Cousins added 11 points off the bench.

“I have no excuse,” Clippers coach Tyronn Lue said.

“I thought we played hard and competed. A little credit – they were making shots and we didn’t. But I loved our fight. I loved what I saw.”

Both teams were missing star players after Clippers forward Kawhi Leonard suffered a knee injury in Game 4 of the second round against the Utah Jazz.

Leonard did not join the Clippers on the trip to Phoenix. Lue said he wasn’t sure of his availability.

The Clippers beat the Jazz in epic fashion, ending one of the league’s most infamous droughts by advancing to the conference Finals for the first time in their 51-year history.