The Boomers guard had 18 points on four-for-10 shooting on threes, along with five rebounds and three assists to lend solid support to LaMarcus Aldridge (21 points) and DeMar DeRozan (20). 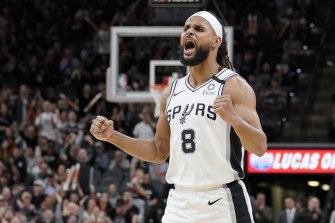 Patty Mills celebrates a basket against the Heat.Credit:AP

Mills requested the Spurs honour his ancestry as well as those of Native Americans, and the franchise obliged on the eve of Martin Luther King Day.

The home side won for the first time in three games to take their season record to 18-23 and keep their playoff hopes alive. They currently sit ninth in the western conference standings.

San Antonio led 60-54 after a first half in which there were three lead changes and seven ties.

Mills led all scorers over the first 24 minutes with 14 points off the bench.

He fuelled a late run by diving out of bounds and throwing the ball off Meyers Leonard to salvage an offensive possession. With cheers of "Patty, Patty," still ringing throughout the AT&T Center, Aldridge drained a hook shot to pull the hosts within 98-97 with 4:39 remaining.

Of Aboriginal and Torres Strait Islander descent, Mills is just one of three Indigenous players to compete for Australia in the Olympics and has become active with the Native American population in Texas.

"He cares about people, this was something that fit perfectly for him and his interests that's why he carried through with it and tried to bring attention to it.

"He didn't play like he did because of that; he does that every night. His energy has been there his whole career. It's who he is."