The Sydney Kings have gone down after yet another late collapse in a fiery clash in which star forward Xavier Cooks was ejected for unsportsmanlike behaviour.

In what has become a major problem for the Sydney side in recent months, they went down 96-87 to the Bullets in Brisbane after holding a 19-point lead.

Sydney’s fourth loss in a row was also marred by Cooks being tossed in the second quarter. The Kings’ co-captain, who has been a rock amid a flurry of injuries and new faces this season, was ejected from Nissan Arena as a result of back-to-back fouls.

Cooks went and sat on the bench before he was quickly informed he needed to leave the court entirely due to the nature of the fouls.

The 26-year-old appeared to pull the shorts of a Bullets player – which drew an unsportsmanlike foul – before being handed a technical foul after making a comment to one of the referees.

Kings coach Chase Buford was asked about the call post-match but was tight-lipped when it came to expressing his frustrations.

“I’m going to save myself some money and hopefully not screw our team any further and not comment on the performance of the officials tonight,” Buford said.

“[Cooks] felt responsible. He felt hurt that he couldn’t be out there with the guys, but obviously [the referees] didn’t feel like he could be [on the court] anymore.”

Despite fellow Kings star Jaylen Adams’ best efforts – finishing with 33 points for four rebounds – it was not enough to cover for their inability to maintain a buffer in the final term with Sydney losing the final quarter 31-15.

The fourth quarter issue was addressed by Buford last week after the Kings handed the New Zealand Breakers just their second win of the season in the closing stages. In similar fashion to the Brisbane meltdown, the Kings were 10 points in front of the wooden spooners before crumbling down the stretch.

Buford told his side after the game they should be “embarrassed” by the 82-75 loss, but was adamant the Kings would be able to fix their fourth-quarter collapse issue within a matter of weeks. It’s not hard to imagine what Buford made of Friday’s nine-point loss.

It was also the first time the Kings were forced to face up against the Bullets’ 226cm Chinese centre Chuanxing Liu – also known as “Big Liu” – who has made history this season in becoming the tallest player in NBL history at 7 foot 5 inches. 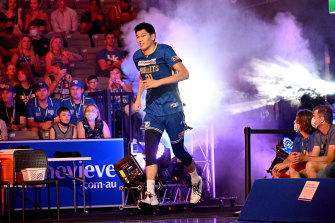 Luckily for the Kings, Liu was only used for two minutes in Friday night’s clash.

The Kings are set to face the Bullets again on Sunday at 1pm – COVID-19 permitting.

Buford said he was confident his team could bounce back despite the tight turnaround.

“We believe in ourselves as a group. We will try and get some redemption on Sunday,” Buford said.

The league has more than 30 fixtures scheduled over the next 25 days in an attempt to make up lost ground, with 107 regular-season games still to be completed before the finals.

On Friday, the NBL media put out a video and message to fans declaring players, coaches and officials were “all in” on finishing this season despite all the delays and COVID-19 cases within teams.