Top NBA prospect RJ Hampton has fired a warning shot before his only game in Sydney this season.

Hampton, a projected top-five NBA draft pick who turned down America's best college basketball programs to join the New Zealand Breakers for this NBL season, has already turned heads with some impressive showings during NBAxNBL games. 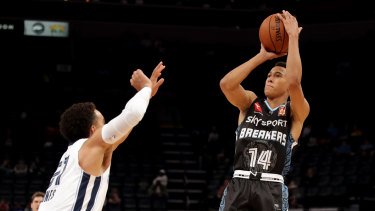 But before his only appearance at Qudos Bank Arena this season – which doubles as the Breakers' season opener – Hampton told the Herald he would be firing from the opening tip when New Zealand face the 2-0 Kings on Friday night.

"I’m going to come out firing. I’ll be focused, I’ll be playing hard and playing to win. I’m excited," Hampton said. "I think it’s good for us that we haven’t really played yet. Coming up to this first game, we’re feeling good. We’re ready to go.

"I’m really excited to play the first official, professional game of my career. I’ve been looking forward to it since I arrived."

Hampton's season will be watched from all corners of the globe, given his status as a burgeoning NBA star.

His decision to leave top colleges such as Duke, Kansas, Memphis and Texas Tech hanging in favour of the Breakers raised more than a few eyebrows in the United States but he harbours no fears that will hurt his development in the all-important pre-draft year.

American college basketball's administrator – the all-powerful NCAA – is under increasing pressure to pay players as star prospects such as Hampton turn down scholarships to chase their NBA dreams elsewhere.

Hampton hopes he can set an example so more players feel comfortable to play abroad in the year between high school and NBA eligibility. 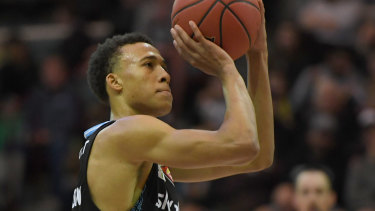 Hampton turned his back on American colleges to play for the Breakers.Credit:Getty Images

"A lot of people are interested in the route I took. I just wanted to show everyone that you can do your own thing," he said.

"This route was good for me and I definitely think it would work for other players but everybody has to do what’s best for them. Hopefully a few more people look at (the NBL) as an option for them now, too."

Meanwhile, the Kings are sweating on the fitness of Andrew Bogut and Brazilian NBA draftee Didi Louzada.

Coach Will Weaver will decide whether either will play through back complaints prior to tip.