Australian NBA All-Star Ben Simmons wants to play at the Olympics but the delayed NBA season could hurt his hopes of going to Tokyo.

Simmons and his Philadelphia 76ers arepreparing for the new season which starts on December 23 (AEDT) and should the Sixers make a run deep into the play-offs under new coach Doc Rivers, it would likely rule Simmons out of his first Olympics as the NBA finals end just as the Games begin. 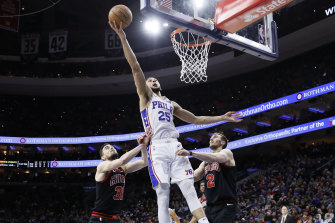 Philadelphia’s Ben Simmons goes up for a shot against Chicago. He still hopes to go to the Olympics next year, if possible.Credit:AP

The COVID-19 testing and quarantine requirements for entering Tokyo for the Olympics remain unknown but any quarantine time would make it difficult for NBA players and coaches to join their national teams.

But Simmons isn’t ready to give up his Olympic dream until things take further shape in 2021.

The 24-year old hasn’t played for the Boomers since he was left out of the 2014 FIBA World Cup side as a teenager but there is hope he could join the Brian Goorjian-led Australian team if the Sixers were knocked out of the play-offs early enough.

"Ultimately I want to play in the Olympics. I want to experience that, I want to win a medal," Simmons said on Saturday.

"Hopefully that all works out with time and everything and if I'm healthy."

Simmons' time in the NBA bubble in Orlando ended early in August when he sustained a knee injury but he has rehabilitated and is "100 per cent" ready to go.

"I feel good. I'm ready to go," Simmons said. "My rehab, from when I got injured to now, I've been very consistent with it and making sure I get back healthy which I am now."

The Sixers have made big changes off the court with NBA championship winner Rivers taking over as coach and high-profile executive Daryl Morey joining as team president. Veterans Dwight Howard and Danny Green have arrived from NBA title winners LA Lakers while Seth Curry joins from Dallas, as does Australian shooter Ryan Broekhoff. 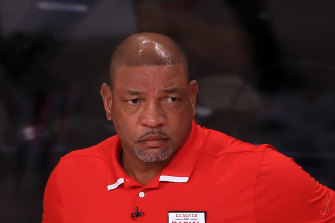 Simmons says he doesn't have a direct position but Rivers has already said that he plans to surround Simmons and fellow NBA All-Star Joel Embiid with shooters and lift their pace of play.

Simmons is also working with new assistant coach and two-time title winner Sam Cassell to vary his speed and add more variety to how he attacks the basket.

"I'm a player man," Simmons said. "There is no one, two, three, four, five [positions] with me. I'm a player. I don't think you can put me in a position because of my talents and what I can go out there and do. But Doc would say the same thing, I go out there and I make plays."

Accountability and leadership are buzz words around the team as they aim to climb into the elite of eastern conference teams. Simmons thinks they are good enough to contend this season.

"Jo and I both realise how unique and special this moment is for two guys like us to be young and on the same team," Simmons said.

"Everyone wanted it to be in the first couple of years but it doesn't work like that.

"We have an opportunity now with new guys on the team, new leadership and I think we can go all the way. I wouldn't be saying that if I didn't believe it. I don't think Dwight would be here if he didn't believe it.

"I'm excited to be with this team. I think it will be a much faster pace and we have more threats from outside so I'm looking forward to it."

He also joked about "moving in" with Embiid to get to know him better, as the pair have been tasked with taking the lead for Philadelphia.

"We have had multiple meetings already, Jo and I with Doc," Simmons said. "This is our team, we need to be responsible, hold yourself accountable on the floor and off the floor.

"Doc is going to put us in the right positions to be successful. Time will tell but I think it's going to work out well."

December 4, 2020 Basketball Comments Off on ‘I want to win a medal’: Simmons has Olympics in sight, if NBA permits
NFL News