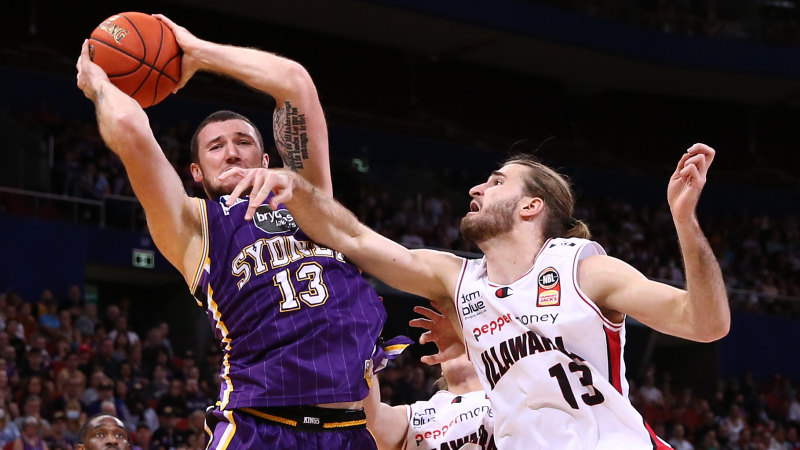 The form team of the NBL brought their own version of ‘showtime’ to the Qudos Bank Arena as they mounted an incredible third-quarter comeback, but it wasn’t enough to overcome the Illawarra Hawks, who triumphed 87-84 to secure a home-court advantage in Game 1 of the three-game semi-final series next week.

Witness to an incredible second-half display was the Kings’ usual colourful cast of off-court characters: Luc Longley, the former Chicago Bulls star and self-confessed team “Yoda”, and owner Paul Smith, who Longley described to the Herald as a “maniac” – perhaps the NBL’s answer to the Lakers’ eccentric owner, Dr Jerry Buss.

Joining them courtside were NSW Premier Dominic Perrottet and Nick Kyrgios – no stranger to on-court fireworks – after both played in a celebrity curtain-raiser for charity earlier in the afternoon.

The Kings needed overtime to beat the Hawks 107-102 in Wollongong just 10 days ago, and there was no shortage of drama this time around with home-court advantage in next week’s semi-final at stake.

It was the visitors who came out flying in front of a packed crowd, shooting out to an 11-point lead before the Kings called a timeout. Missing star American import Jaylen Adams, the Kings struggled to keep pace with the scoring power of Justinian Jessup, whose 15 points had the Hawks going into quarter-time with a 14-point lead. 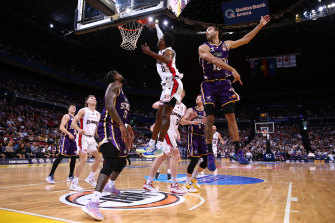 Antonius Cleveland drives to the ring for the Hawks.Credit:Getty

Jessup was quieter in the second period, but Xavier Rathan-Mayes and Tyler Harvey continued their strong form together in a more even second term. The Kings were furious with the referees for giving Antonius Cleveland three free throws after the Hawks guard was fouled attempting a long-distance shot on the half-time buzzer. Cleveland’s conversions gave the Hawks a 13-point lead going into the main break, and coach Chase Buford was visibly frustrated going down the race.

Hawks coach Brian Goorjian identified Cooks as the one to stop if they were going to get revenge over their NSW rivals, but the power forward added five points inside the first four minutes as the Kings mounted their comeback. All 12,632 fans in attendance seemed to get behind the Kings as they paired back the Hawks’ lead – three points from Angus Glover reducing the margin to just two.

Cooks converted two free throws to bring scores level to start the last quarter before Wani Swaka Lo Buluk drew the foul to give the Kings the lead and a chance at a three-point play. He missed the free throw after the Hawks called a timeout, but it was the Kings with all the momentum. Tyler Harvey – who the Kings had well and truly shut down since half-time – came up with three-points from the corner to give the Hawks back the lead.

But Cooks missed a chance to draw level with 30 seconds on the clock. Rathan-Hayes missed down the other end and a scramble at the Kings end resulted in no foul, giving the Hawks a chance to call a timeout and play out the last few seconds of a last-round classic.

The Kings were the first team to win three consecutive NBL championships and are looking to return to their own golden era with their first championship since 2005.