Zoom press conferences can be awkward at the best of times, but Australian basketballer Josh Giddey faced a doozy of a moment during his pre-NBA draft media call on Saturday morning (AEST). 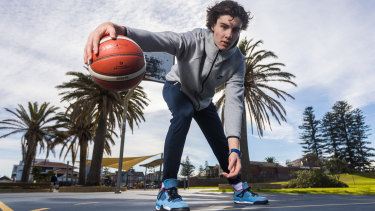 As the 18-year-old answered a question about his close connection with Andrew Gaze, a US journalist, thinking he was on auto-mute, was interrupted by a small child while working from home.

His parental question boomed across Giddey’s answer, yet this is where the 200-centimetre point guard showed why his poise and ability to read the play is rated so highly.

For a half-second, his eyes widened and his answer paused, and then he continued with barely a grin.

Everything matters in the lead-up to the draft as teams sweat on who they will give guaranteed multi-million dollar contracts to, and Giddey has gone from outside the first round to being considered a top-10 pick in less than a year.

When he entered the NBA Global Academy in Canberra in 2019, Giddey aimed to follow his parents, former Melbourne Tigers NBL and WNBL players Warrick and Kim, in playing at national level.

But his game developed so fast the NBL and Adelaide 36ers signed him as a Next Stars player for the past season and his rookie of the year performance had NBA franchises lining up for his services.

“I didn’t think I’d be positioned where I am now,” Giddey said.

“My goal was to be a good NBL player prior to going into the academy. As I got better and better I slowly started progressing. The NBA was always a dream, but it didn’t become a reality until probably six to 12 months ago.”

Three-time NBA champion Luc Longley has been lobbying Golden State Warriors coach Steve Kerr to take Giddey with the seventh pick in Friday morning’s draft (AEST time). Giddey said he would be ready to help anyone, whether it’s duel NBA MVP-winner Stephen Curry’s Warriors, or one of the rebuilding franchises such as the Orlando Magic.

“It’s about me making the most of any situation I’m in, whether it’s a superstar team, or a rebuilding team, or whatever the situation,” Giddey said.

“I’ll need to develop and adjust to the style of play of whatever team I’m in. For a passer like myself, playing with guys like Steph and Klay Thompson would be a dream role.

“They fly off screens and play without the ball and you are able to hit [pass to] them and they make shots at a really high level, which we’ve seen over a long time.”

Giddey could be the first global academy player picked in the first round since its creation in 2016, while he has also handled being one of the last cuts from the Boomers side for the Tokyo Olympics with class – staying with the team for its build-up games and starring against Nigeria.

He learned from the NBA players in that group and that, along with his season in Adelaide, has teams hopeful he could play a role next NBA season, despite still being a teenager.

His passing is already at a high level, but he acknowledges his shooting and defence needs a lot of work.

“A lot of rookies go through a tough time [in their first season] and I went through that a bit with Adelaide,” Giddey said.

“It’s about staying with it and learning from your veterans. It’s been good having Josh Green and Matisse Thybulle on the Boomers who are new to the NBA, so to hear what they went through as rookies, it will be good to take that and keep it in the back of my mind going into my rookie year.”

The NBA Draft will be held on Friday, starting at 10am AEST. ESPN is showing it live.

July 24, 2021 Basketball Comments Off on From Curry to ‘poop’, Giddey handles the tough questions ahead of NBA Draft
NFL News