Enough B.S. Suspend him indefinitely. Let the players’ union fight it. Who cares? 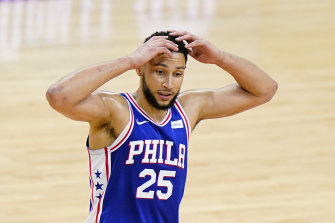 Ben Simmons has been suspended for one match by the 76ers.Credit:AP

Let Klutch Sports complain. Let it threaten to not do business with you. It doesn’t matter. Rich Paul, LeBron James’ personal lieutenant and Klutch’s chief, can leak whatever he wants to whomever he wants. This garbage cannot stand.

You can’t trade Simmons at this moment. He has zero value. Let him stew, make him return, play him at power forward, reestablish his worth, and then ship him off.

Simmons never has been worth Damian Lillard, or Bradley Beal.

This happened on the eve of the Sixers’ opener at New Orleans. Simmons could not be more of a distraction if he secreted game plans to each opponent and gave Karl-Anthony Towns the password to Joel Embiid’s Twitter account.

Rivers has been Simmons’ most committed apologist. Now, though, Doc has jumped off the “Treasure Ben Simmons” train, of which he was the conductor last season. He demeaned himself defending the NBA’s most reluctant shooter and its most narcissistic star – and that’s saying something.

Hit him where it hurts most: his wallet.

The Sixers already paid Simmons US$8.25 million of his US$33 million salary due him this season, but withheld the US$8.25 million lump sum due October 1 since he was holding out, hoping to force a low-value trade. Assuming they didn’t pay him that lump sum, they now owe him US$24.75 million. A one-game suspension should cost him about US$300,000. Not enough.

Suspend him for all 82 games if necessary. It’ll cost him almost US$25 million, including the US$1.4 million in fines he accrued in his 14-day training camp holdout. He’ll start to feel that more and more when the mortgage payments on his US$17.5 million mansion outside of Los Angeles come due.

Every player who defended him – looking at you, Danny Green, Matisse Thybulle, and, until lately, Embiid – should understand now he was not worth their breath. They should understand now that his selfishness extended far past the basketball court, where he refused to shoot jump shots, refused to try three-pointers, and, in game seven of the eastern conference semi-finals against the Hawks, refused an easy dunk late in the game because he’s afraid to shoot free throws.

Enough.Enough of this B.S., and his b.s.

We knew Simmons had issues on the court after the 2018 conference semis, when the Celtics refused to guard him on the perimeter, and he made several poor choices, but he was a rookie. You hoped his offensive inclinations would change.

He ignored the Sixers’ requests to work with their shooting coach and first hired his own specialist, and then his brother, to work with him.

Off the court, Simmons does not engage with his teammates. He surrounds himself in a bubble of friends and family who offer no criticism; sycophants who coddle him and encourage his insouciance.

The only punishment that fits, the only recourse the team has, is to bench him until he starts to earn his money.

It’s the only language B.S. speaks.