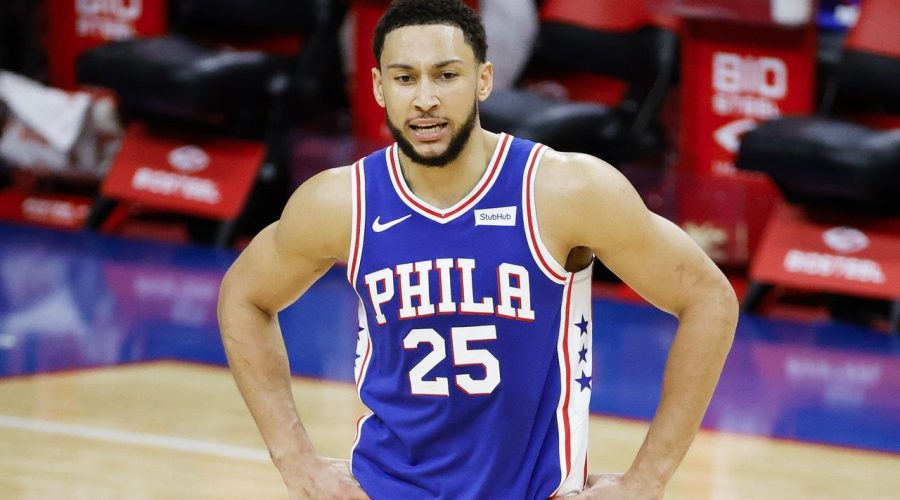 Australian star Ben Simmons has been forced to miss the NBA All-Star game after having his hair cut by a barber who tested positive to COVID.

Simmons’ dreams of a third NBA All-Star appearance were dashed on Sunday (US time) when league officials ruled him and Philadelphia teammate Joel Embiid out of the annual clash.

The two had contact with a barber who has since tested positive for coronavirus.

The barber, located in the Philadelphia area, tested positive after undergoing additional testing on Sunday because of an inconclusive positive test.

The NBA is desperate to avoid the potential disaster of a COVID outbreak while its best two dozen players are all gathered in the same city and had no choice but to keep the 76ers stars out of the game, which begins at noon on Monday AEDT.

Joel Embiid and Ben Simmons came into contact with a barber who has since tested positive for coronavirus. Picture: Elsa / Getty Images North America / AFPSource:AFP

Both Embiid and Simmons travelled by themselves on private planes on Saturday night and had no exposure to other players or people in the Atlanta bubble.

Simmons reacted to the situation by opening a bottle of Penfolds wine.

Both Embiid and Simmons have remained in quarantine, which is the protocol for every All-Star participant.

The NBA has feared an outbreak involving the league‘s best players in Atlanta and has significant precautions in place to isolate the players on the way in and out of the city for the game.

Simmons was picked fourth among the reserves, and 13th overall, by LeBron James for his roster.

Paul George, who was to be teammates with Simmons on Team LeBron, said he was not in favour of holding the All-Star Game.

“You have situations like we are dealing with today, it‘s just an unfortunate time in the world where our health and safety should be at the front of the helm,” the LA Clippers star said during his All-Star media access on Sunday.

“I personally didn‘t agree with the game, but it is what it is.”

It’s uncertain how long Simmons and Embiid might be sidelined, but the 76ers are scheduled to resume the NBA regular season on Thursday against the Bulls in Chicago.