One of the most reviled former players in Philadelphia’s sports history got the hostile homecoming the Brooklyn Nets guard expected in his first game in the city since his former team acquiesced to his trade demand in February. 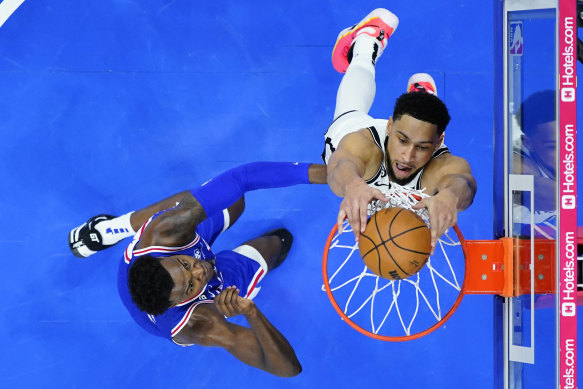 The Nets’ Ben Simmons goes for the dunk against the 76ers Paul Reed in Philadelphia.Credit:AP

Simmons was voraciously booed from the moment he stepped on the Wells Fargo Centre court for warm-ups against the 76ers to the first time he brought up the ball against his former side, the Philadelphia 76ers, and throughout the game.

Simmons had 11 points, 11 assists and seven rebounds to the tune of steady boos. Kyrie Irving scored 23 points and Kevin Durant had 20 before coach Jacque Vaughn pulled his starting line-up with three minutes left in the game.

Oh yes, Sixers fans cursed, they turned old No. 25 jerseys into art projects and the scorned mostly let the mercurial guard have it for their belief he turned his back on the franchise that made him the No. 1 pick in 2016.

“I can’t worry about everyone’s feelings,” Simmons said in the pre-game shootaround.

Simmons played his first game in Philadelphia since a June 20, 2021 game seven loss to Atlanta in the eastern conference semi-finals. He passed up a wide-open tying dunk late in the loss that triggered passive criticisms from coach Doc Rivers and Embiid that unravelled the relationship.

Simmons also had back issues and later said mental health woes played a role in his trade demand in the summer of 2021 that led to a contentious few days in training camp. Simmons was sent home for good, filed a grievance after the Sixers said he breached his contract (it was later settled in a confidential agreement) and then shipped to Brooklyn in a trade for All-Star James Harden.

Embiid and Harden sat out Wednesday’s match (AEDT) with injuries, as did Tyrese Maxey, the genial guard who became in instant fan favourite as Simmons replacement. 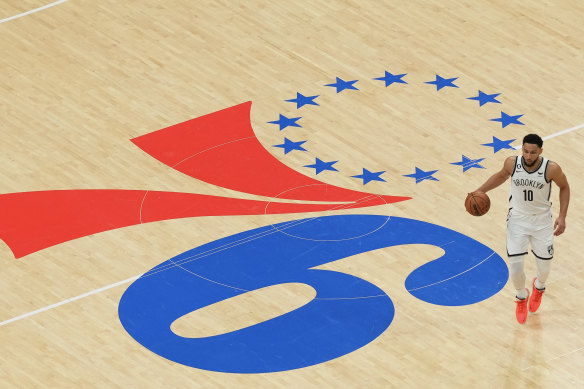 Once his home court, now enemy territory for Ben Simmons in Philadelphia.Credit:Getty Images

Simmons, who watched from the bench as he recovered from a back injury when the Nets played in Philly in March, told reporters at the shootaround he had no hard feelings toward Embiid and other former teammates.

“We had a lot of highlights. We had lot of great times,” Simmons said. “I got a lot of love for Jo, too. Obviously, didn’t work out. That’s life. Not everything works out in your favour.”

Ask if he might seek out Embiid, Simmons cracked, “Yeah, we’re going to do our secret handshake.”

Nets players laughed in the pre-game lay-up line when Simmons jogged out to boos.

“I had a lot of great moments here. This is where I became a man, I feel like,” Simmons said. “I’ve always had a lot of respect for Philly in that way. I’ve got a lot of love for Philly.”

The expected marquee match-up was dimmed with Embiid out with a sprained left foot, Harden still out with a tendon strain in his right foot.

Embiid v Simmons will have to wait, but Simmons v 76ers fans was pretty good.

Simmons was heckled, drew a flagrant foul, shushed the crowd on a lay-up, and even Jordan-shrugged after hitting free throws. Of most importance for a player who has battled mental health issues, Simmons played with poise as boos rained on him for the bulk of his 32 minutes.

He already had three assists when he went to the free-throw line early in the game. Simmons was booed but never looked rattled and sank both baskets. Simmons had a reverse lay-up minutes later for his first bucket.

Sixers fans were mostly well-behaved — save for a couple of short-lived “[expletive] Ben Simmons!” chants — and mostly saved the four-letter words for tape on the back of their old No. 25 jerseys.

Simmons and second-year Sixer Georges Niang tussled late in the first half and Niang gave his former teammate a light stiff-arm to the body that earned a technical foul.

Simmons missed the technical free throw and the crowd roared as much as it did all game. Simmons, though, hit the court for a steal and knocked the loose ball to Durant for a bucket.

It wasn’t all jeers, all game. Simmons did make 76ers fans go wild over him when he missed consecutive free throws in the second half and triggered a free fast-food chicken promotion.