Southside Flyers' superstar recruit Liz Cambage will face off with her former club Melbourne Boomers in the opening round of the WNBL.

The Flyers and Boomers will play on November 14 in Townsville in a jam-packed opening round which will see Southside play four games within five days. 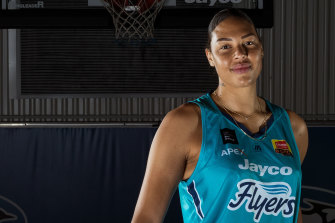 Australian superstar Liz Cambage is raring to go after a two-year absence from the WNBL.Credit:Getty Images

The WNBL announced earlier this month it had secured a deal with the Queensland government to base all eight teams in a hub in North Queensland and play a condensed campaign in Townsville and Cairns, along with eight games in Mackay, before the grand final on December 20.

Teams are already serving their 14-day quarantine in Brisbane where they are allowed out to train in preparation for the season which is expected to be shown on free-to-air TV, Fox Sports and Kayo Sports, although they have yet to announce their plans.

Cambage's return to the WNBL flew under the radar due to the COVID-19 pandemic but her arrival home will give the league and the Flyers a big shot in the arm, as will the return of WNBA rookie Ezi Magbegor for her third season with the Boomers following her recent WNBA championship win with the Seattle Storm.

WNBL clubs are used to playing across the summer but the rapid-fire nature of this season will see them play double-headers with a single ticket covering the two games.

Both the Flyers and Boomers will start their seasons with a Thursday night game on November 12 with the Flyers facing Bendigo Spirit and the Boomers playing Sydney University Flames.

Basketball Australia head of women's basketball Lauren Jackson said this season would be like no other before it with 60 games played over 39 days.

"It's a challenging fixture that will test the depth of each team's roster as they rotate through Mackay, Townsville and Cairns," Jackson said.

"This festival of basketball will provide fans throughout North Queensland and further afield with the opportunity to see some of the best basketballers in the world including former, current and future Olympians.

"As a league, we all can't wait to converge on North Queensland to contest the 41st season of the WNBL, which will definitely be like no other before."

The Boomers have kept a core of their roster from last season while bringing back Opals guard Tess Madgen. The Flyers have added some well-known names with Steph Blicavs returning after having her first child, Olympic forward Rachel Jarry returning from a season out and AFLW star Monique Conti joining after leaving the Boomers late last season due to football commitments.

A location for which cities will host the finals games have not been announced.

The full WNBL schedule can be found here.