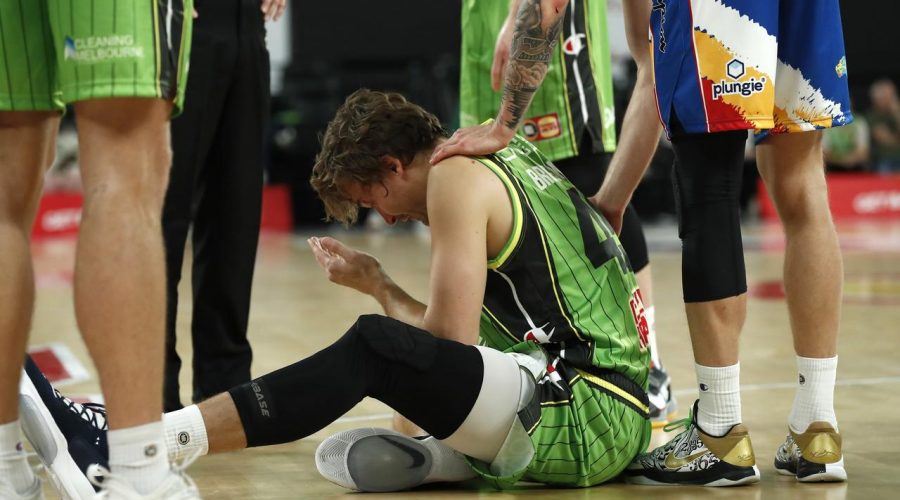 South East Melbourne Phoenix star Ryan Broekhoff has revealed he could wear a face guard when he returns from a serious eye injury as early as next week.

Broekhoff won’t play in Saturday’s Throwdown against Melbourne United after suffering an inadvertent elbow to his left eye from Bullets guard Nathan Sobey in round 16.

The Boomers swingman experienced blurred vision and after the game was sent to hospital, where it was revealed he had damaged his eye socket.

Broekhoff also encountered bleeding on the eye, which has forced him to take a cautious approach with the NBL finals and a potential Olympic call-up on the horizon.

“It is just going to take a little time to heal, and we are looking at options at how it (the eye) can be protected or covered,” Broekhoff said.

“A (protective guard) is not hugely done over here in Australia, you don’t really see it too often, so we are trying to talk to some doctors who have dealt with players wearing masks or some sort of protective gear on their face and whether it works and if it is beneficial.

“So, we are looking at all the options, just to be smart and safe, but also to try and get out there as quickly as possible.”

Broekhoff is yet to resume training with the Phoenix but hopes to do so in the coming days.

The former Dallas Mavericks guard is feeling significantly better than he was when he first arrived in hospital last week after suffering the injury.

“The pupil on the eye that got hit was quite a lot smaller than the other side,” he said.

“So, they were just concerned for my vision, and there was a little bit more damage than just a few stitches I received.

“They also found bleeding in the eye, which was part of the reason for the pupil being such a different size.

“They gave me some drops to help clear the blood out, and it just took a few days for that to improve, and my eyesight is back to normal now.

“But unfortunately, there was a little bit more damage to the eye socket than we were hoping for.

“Everything has been considered when it comes to your eye with vision. Things can be a little bit more serious, and you must be careful at times.

“So, we are just going through options and working with the team docs and some optometrists to go over the best options to work out the safest time for me to return as soon as possible without putting myself at too much risk for further damage or complications.”

This eye injury is the latest setback for Broekhoff, who was returning last week after missing five games with a groin issue.

He is particularly disappointed to miss the Throwdown against arch rivals United.

“I was finally feeling good after the groin strain injury and first game back to have this accidental hit.

“I obviously want to be out there playing and the Throwdown is a game on the calendar that you circle, especially with Melbourne being the top team now.

“They are the in-form team of the competition, and one you want to get up and play against.”

The Phoenix will look for import point guard Keifer Sykes to fire in Broekhoff’s absence.

Sykes returns from an ankle injury and is determined to star after being on minute restrictions the last time he played against United in late March.

Broekhoff is expecting a big game from the Chicago native on Saturday.

“Even watching Keifer this week at training, you can see the enthusiasm and excitement to be back and feeling more like himself than when he came back from the ankle,” he said.

“Although he was out there, it wasn’t the Keifer we all know and want to watch.

“It is a big boost for the team to get him back and get him into a really good rhythm over these next few weeks, hopefully leading into the finals.”

May 7, 2021 Basketball Comments Off on Broekhoff to consider protective measure
NFL News