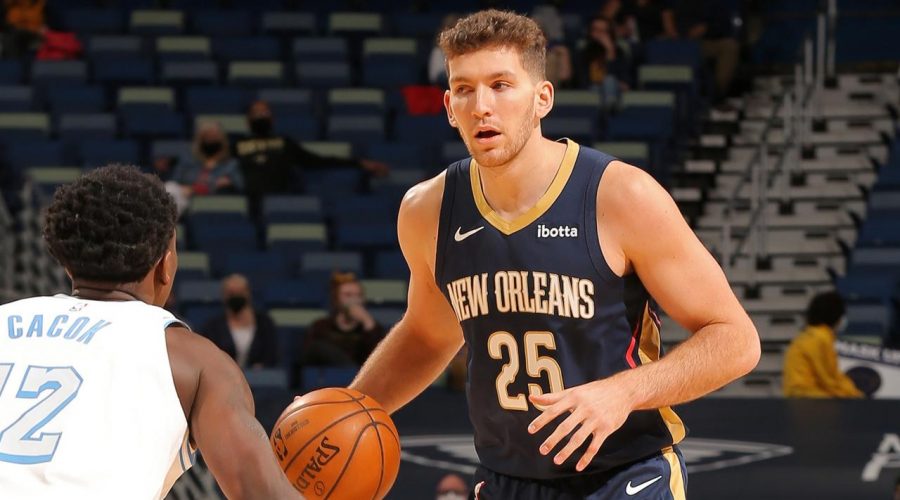 Brisbane boy Will Magnay has been waived by the New Orleans Pelicans, but he will stay in the US to pursue more NBA opportunities and prepare for Australia’s Tokyo Olympics campaign.

Magnay’s career is in limbo after the Pelicans opted to waive his two-way contract to clear the way to sign former Atlanta, Philadelphia, Minnesota, and Houston small forward James Nunnally on a two-way deal.

New Orleans require wing depth and Magnay was behind a host of players in the big rotation.

The cut is tough to take, but the timing could be perfect given the former Brisbane Bullets star is set to have a minor operation to remove bone spurs in his foot.

Upon being waived by New Orleans, Magnay received interest from multiple NBL clubs, but he opted to remain in America to focus on his recovery post foot surgery.

Will Magnay is in search for a new NBA franchise after being waived by the New Orleans Pelicans. Picture: Steve PohlnerSource:News Corp Australia

He is also keen to prepare for the Australian Boomers training camp, set to be based in Las Vegas in the lead-up to July’s Tokyo Olympics, and then potentially the 2021 NBA Summer League.

Magnay has certainly proved he belongs on the NBA stage.

He may have missed a three-pointer and only played three minutes on debut against the Los Angeles Lakers in late March, but he possesses the skills and ability to excel in the world’s best league.

Magnay’s journey from development player with the Bullets to going undrafted in the 2018 NBA draft, a three-year stint in the NBL and finally a two-way NBA contract will inspire countless Australian kids to follow in his footsteps.

Prior to his NBA call-up with New Orleans, he had been excelling for the franchise’s G League team – the Erie BayHawks.

Magnay averaged 9.1 points, 5.4 rebounds and 1.8 assists through his 10 regular-season games with the BayHawks.

He scored a season-high 20 points against the Raptors 905 back in February and attracted widespread praise from G League and NBA scouts alike.

The 22-year-old Brisbane product has impressed plenty of people in America with his skill at both ends of the floor for a big man, so he has a bright future.