Liz Cambage may have played her last game for Australia after she was overlooked for selection for next year’s World Cup on home shores.

Basketball Australia will release a preliminary 24-player squad for the FIBA World Cup on Monday and The Sunday Age and Sun-Herald can reveal that Cambage, the 30-year-old WNBA centre and Olympic bronze medallist, will not be included. 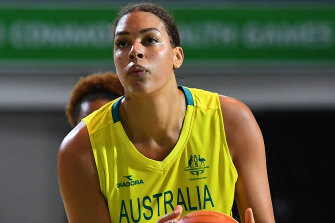 Cambage, one of the world’s most dominant players, was last month given a formal reprimand by an independent BA integrity panel for her behaviour in a pre-Olympic warm-up game against Nigeria in Las Vegas, a penalty which basketball insiders thought was on the lighter side for she could also have been fined or suspended.

The panel found Cambage guilty of prohibitive conduct on one charge in relation to her verbal and physical altercation with players on the Nigerian women’s team but cleared her of three other charges.

Soon after the incident in July, Cambage quit the Olympic campaign, citing ongoing mental health issues as a result of living in biosecure bubbles. There had been allegations Cambage had also broken protocol and left the Opals’ Las Vegas bubble, but she has denied this.

It is unclear if she wanted to take part in next year’s warm-up matches and the World Cup but, regardless, team sources say she was not going to be selected.

Cambage has fallen out with teammates and there remains friction between her and team leaders. According to team sources, some teammates are still in disbelief about the whole affair. However, there is a general feeling among players and officials that it’s time for the Opals to move on, even though Cambage remains the team’s best player. At this point, team sources say it’s unlikely she will be in the selection frame for a comeback at the 2024 Paris Olympics.

Cambage’s manager Michelle Tozer, of IMG, has repeatedly refused to comment when contacted about her client’s Opals’ future.

The Opals struggled without Cambage in Tokyo – her ability to score with the shot clock about to expire could not be replaced – and they were eliminated in the quarter-finals.

However, there is optimism in Sandy Brondello’s squad that there is enough experienced and emerging depth at centre – including Melbourne Boomers’ Cayla George and Seattle Storm’s Ezi Magbegor – to ensure the Opals are firm World Cup medal contenders.

Cambage returned to the WNBA and the Las Vegas Aces after the Olympics finished, and has been working as a DJ performing dance music sets at nightclubs in the US.

She recently caused a stir by joining adult subscription site OnlyFans, having modelled for Playboy and posed naked for Sport Illustrated’s Body Issue.

“The amount of money I could be making off OnlyFans is crazy,” she told NBA trainer Chris Johnson on Instagram in April. “What am I doing sitting here? It would need to be called something else though. 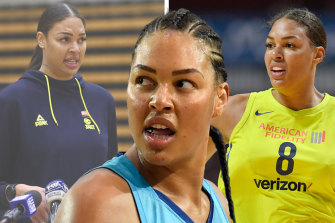 Cambage opted to not return to the WNBL this season, having been a pivotal figure in leading the Southside Flyers to a championship 12 months ago.

The World Cup qualifying tournament will be held in Serbia from February 10-13. The Opals will take part despite the fact they do not need to because they are hosting the World Cup. The USA also has automatic qualification, as the Americans are Olympic champions.

Jenna O’Hea, who captained the Opals in Tokyo, New York Liberty’s Rebecca Allen, Leilani Mitchell (Washington Mystics), Alanna Smith (Phoenix Mercury) and Stephanie Talbot (Seattle Storm) are among those in the 24-player squad, while emerging star guard Shyla Heal, the daughter of Australian great Shane, has also been given the chance to impress. Shane, as coach, and Shyla, as playmaker, are two of the headline acts of the Sydney Uni Flames in the WNBL, the season having tipped off this weekend.