It was 470 days in the making, but Ben Simmons finally returned to the court on Tuesday, stepping out with the Brooklyn Nets for the first time in a pre-season game against his former club, the Philadelphia 76ers.

Playing at the Barclays Centre in New York, the Nets playmaker finished with six points, five assists, four rebounds and a steal in 19 minutes, before he was rested in the second half of a 127-108 loss.

He was booed by 76ers fans when he missed a pair of free-throws, but overall finished happy just to be back playing after missing the entire 2021-22 season through a contractual drama with the 76ers, leading to his trade to the Nets, a back injury requiring post-season surgery and mental health issues, in part relating to the fallout from the 2021 play-off loss to Atlanta. 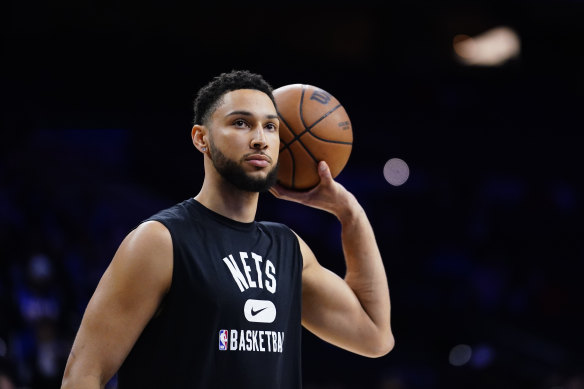 Ben Simmons finally took to the court for the Brooklyn Nets for the first time, scoring six points in a loss to his former team, the 76ers.Credit:AP

It was the first time Simmons, 26, and superstars Kevin Durant and Kyrie Irving had officially played together, and there was a lot to like. Durant had 13 points, four rebounds and four assists, while Irving had nine, four and four, each also logging 19 minutes.

The 76ers did not play Joel Embiid, who had a tumultuous relationship with Simmons when paired as teammates, or fellow superstar James Harden.

Simmons’ first points came off a strong dunk in transition, and his court vision was on show when, from the low post, he whipped a pass across court to Royce O’Neale for a three-pointer. It’s this type of play that has Nets coach Steve Nash salivating, for Simmons can feed not only Durant and Irving but spot up shooters Patty Mills (four points in 10 minutes) and Seth Curry, the latter working his way back from ankle surgery.

Simmons was used at point guard, particularly with the second unit, and centre, when, lurking along the baseline, he defended multiple positions – he is a two-time NBA all-defensive first team member – and produced a no-look pass leading to a dunk.

The Melbourne-born, three-time All-Star pleased Nash when he drove to the basket and was fouled. Simmons’ unwillingness to get to the hoop in case he was fouled, forcing him to the foul line where he has a poor career 60 per cent clip, has been well documented. While he missed both attempts in this game – his stroke is still an issue – at least he ventured there.

“To be honest, whether Ben is super efficient from the line or not, I still want him to go to the line,” Nash said.

“Go to the line, stay aggressive, and I want to take the risk off his play. I’m not going to be discouraged if he doesn’t shoot a better percentage than he has in the past.”

Commentator Sarah Kustok, providing expert comments for the Nets’ own broadcast on the YES Network, said Simmons had been “solid”.

“You felt him working his way in, finding spots on the floor that he could be effective offensively. It’s not just about scoring, it’s about how he could facilitate and the vision he has on the floor,” Kustok said.

“Of course, defensively he’s a force and a presence and I think just picking some of those points, whether it was pressure on the perimeter, coming from behind in transition, you saw a lot of that and just how much he can really take an opponent out of the offence. The more he was in, the more comfort you could see.”

The Nets’ pre-season continues on Friday (AEDT) when they host the Miami Heat.

October 4, 2022 Basketball Comments Off on Ben Simmons returns to the court after 470 days
NFL News