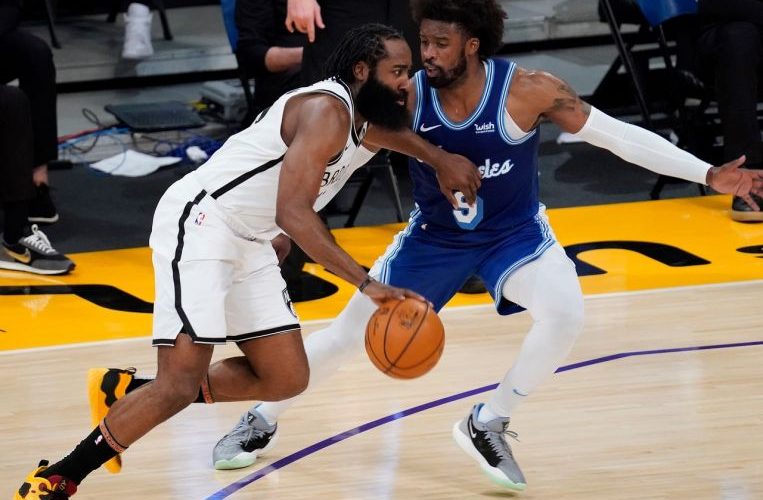 LOS ANGELES (AFP) – James Harden scored 23 points as the Brooklyn Nets blew away a depleted Los Angeles Lakers in a one-sided showdown between the Eastern and Western Conference heavyweights on Thursday (Feb 18).

With Kevin Durant sidelined with a hamstring strain, Harden shouldered the offensive burden as the Nets extended their winning streak to five games with a 109-98 victory at the Staples Centre.

Kyrie Irving, returning after missing Tuesday’s win over Phoenix with back stiffness, finished with 16 points as the Nets notched up their fourth straight win on the road.

The Lakers scoring was led by LeBron James with 32 points. James’s scoring display saw him tick off another statistical milestone, with the 36-year-old passing 35,000 career points.

The Lakers – already missing Anthony Davis – were hit by another high-profile absentee on Thursday with the late withdrawal of Dennis Schroder, who was ruled out due to Covid-19 health and safety protocols.

The Nets improved to 19-12 with the win to remain in second spot in the Eastern Conference, one game back from the Philadelphia 76ers. The Lakers remain second in the Western Conference on 22-8, 2.5 games adrift of the Utah Jazz.

Nets coach Steve Nash praised his team’s improvement in the past week, which has come in the wake of a run of games where they conceded 120 points or more, including a thumping loss to the Detroit Pistons on Feb 9.

“That was a low for us,” Nash said of the Pistons loss.

“And it did provoke some conversations, and a re-dedication to what we’re trying to do. I’m proud of the way they’ve responded since then. We’ve taken care of business.

“But it’s more important that we’re progressing. It also tastes sweet when you come out West and win some games.”

Nash however said the Nets would not be reading too much into Thursday’s win over the reigning NBA champions.

“I don’t think we’re getting too carried away,” Nash said.

“It’s two teams that didn’t have full rosters. I think we played a solid game. It’s a good win on the road. But it’s super early in the season and we’ve got a lot of room to grow. It’s just a little milestone for us.”

Elsewhere on Thursday, the Milwaukee Bucks slid to a fifth straight defeat with a thumping 110-96 home loss to the Toronto Raptors.

Giannis Antetokounmpo led the Bucks scorers with 23 points but had a frustrating night, shooting just eight of 20 attempts and missing all four attempts from beyond the arc.

Despite the loss, Bucks coach Mike Budenholzer was able to take positives from the defeat.

“It’s hard going through what we’re doing,” Budenholzer told reporters. “We lost again tonight, but the competitiveness, the spirit, was actually better …. we’ve got to build on that.”

In the only other NBA game on Thursday, Tyler Herro scored 27 off the bench as the Miami Heat defeated the Sacramento Kings 118-110 in California.