Argentina legend Luis Scola has backed the Australian Boomers to do what many think is impossible and beat Team USA in their Tokyo Olympics semi-final on Thursday.

Five-time Olympian and 2004 gold medallist Luis Scola faced off with the Boomers as they knocked out his Argentina side 97-59 in Tuesday night’s quarter-final, and he said post-game he could see Australia beating the USA. 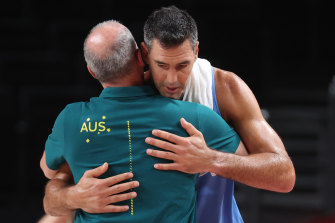 In 2004, Scola’s Argentina side beat the USA – a team featuring Tim Duncan, LeBron James and Allen Iverson – in the semi-finals 89-81 and then beat Italy in the gold medal game.

“The Soviet Union and Yugoslavia – they were the only [other] two and they don’t exist anymore,” Scola said.

“That tells you how hard that is. The US is coming prepared, they really want it but I do believe Australia has a chance.

“They have got a very good team. Patty Mills is a tremendous leader, tremendous player. They have a shot.

“They have to play the right way, play a good game but they have the possibility to do that.

“It’s not going to be easy but they beat the USA in the preparation [tournament]. This could be the year.” 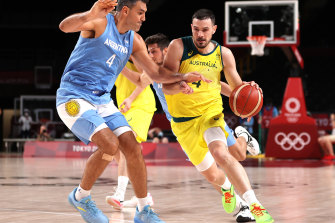 The Soviet Union beat the USA in the 1972 Olympics, Yugoslavia won in 1980 when the American team boycotted and the Soviets won again in 1988.

After 1988, Team USA started sending NBA players instead of college players to the Olympics and 2004 was the only time they have fallen short since.

Scola, 41, was given a standing ovation from players and coaches from both the Boomers and Argentina as he left the court with 51 seconds left in the loss to Australia. Players on court stopped and joined in the ovation.

Mills said players of his generation took inspiration from Scola for his success in the Olympics and the NBA as a foreign player.

“It was a very moving moment,” Mills said.

“It was the least that we can do to have a moment for him.” 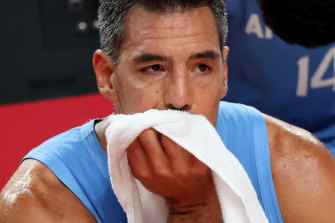 The standing ovation was an emotional moment for Luis Scola.Credit:Getty Images

While Scola had wanted to play out the game, he was overawed by the gesture.

“It was a very emotional moment. I was not expecting that,” Scola said.

“I didn’t think too much about this moment. I tried to stay away from all that. I thought we were going to win the game.

“At the end, I thought I was gonna end the game on the court. But I came out and it was kind of like a special moment.

“It was a very nice recognition. I was very proud.”