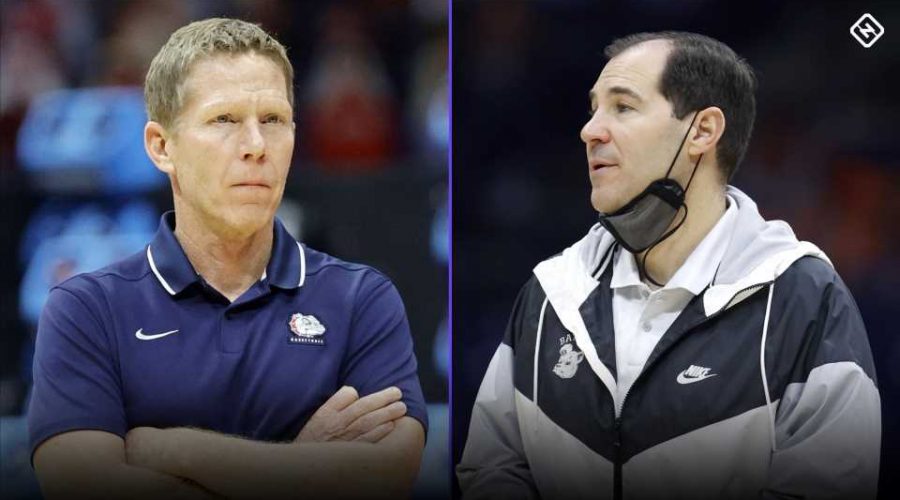 INDIANAPOLIS — The NCAA men’s basketball championship, since it became colloquially known as the NCAA Tournament, since it became officially trademarked as March Madness, has given us such an abundance of gifts it is as if Santa Claus is the perpetual selection committee chair. Each March, we look beneath the tree, and the bounty overwhelms.

But the tournament almost never — maybe never never — gives us this.

It does not give us Ali-Frazier. It does not give us the 1986 Fiesta Bowl, Penn State vs. Miami. So often, that sort of sporting serendipity must be arranged, and the tournament defies design. It traffics in inspired chaos, and because that is what it promises, it rarely disappoints.

And yet somehow, in a most unpredictable tournament in this most unpredictable of seasons, the Madness has given us a championship game matching the best vs. the best: Gonzaga vs. Baylor, Monday night at 9:20 ET at Lucas Oil Stadium. The team Sporting News identified as No. 1 in the preseason against the team we proposed as No. 2. The team the Associated Press poll identified as No. 1 against its No. 2. The team the USA Today coaches’ poll projected as No. 2 against No. 1. The team the actual NCAA selection committee designated as the foremost of its four No. 1 seeds against the team that was second in that listing.

“Look, we’ve always had Baylor in the rearview mirror or whatever, in the backseat. Kind of as: If we’re going to win this thing, we’re probably, at some point, going to have to play them,” Gonzaga coach Mark Few told reporters Sunday. “Because I always thought we were the two best teams.”

“It’s so hard in college basketball: 40-minute games, illnesses, suspensions, injuries, transfers, whatnot . . . anything can happen, the best team might not always win,” Baylor coach Scott Drew said. “You look at it, both teams have really handled the expectations and pressure, and both teams are in this position. We’re excited. Players always want to play against the best, and Gonzaga’s definitely been the best this year as far as haven’t been beaten yet.”

Each of the teams produced a first-team All-American, wing Corey Kispert for Gonzaga and guard Jared Butler for Baylor. The Zags were represented on the second team by center Drew Timme and guard Jalen Suggs. Bears guard Davion Mitchell was a third-teamer, also, and added to that by winning the Naismith Defensive Player of the Year award.

Gonzaga stands as the No. 1 team in offensive efficiency at 127.2 points scored per 100 possessions. Baylor is No. 2 at 124.2. Gonzaga is No. 1 in KenPom.com’s adjusted efficiency margin — the difference between what a team scores and what it allows — and Baylor is No. 2. Finding a means of gauging college basketball teams that does not identify these two as the season’s best teams seems a worthless exercise.

“I think you have elite on elite,” Drew said.

Baylor’s defense at last showed itself to be performing at that level in the Bears’ semifinal game against Houston, with the Cougars shooting only 38.2 percent from the field and 31.6 percent on 3s. Mitchell is such an oppressive defender and Suggs such an irrepressible offensive talent that much was discussed about their matchup Sunday. But the more important matter for the Bears may be whether they can continue to enforce Kispert’s mild shooting slump. He was just 7 of 21 from deep over the past three games and averaged 15 points, down nearly four per game from his season average.

Baylor has done well in this tournament at controlling opponents’ preferred options. The leading scorers for its five high-major opponents were held an average of five points below their season averages. But secondary options have performed well, such as Marcus Sasser’s shooting show in the first half of the Houston game. That approach is a bit dangerous against the Zags, who have gotten multiple 20-point games from their Nos. 3 and 4 scorers.

“Players are going to make plays. We just want to make things as difficult as possible for them,” Drew said. “Easy buckets, transition buckets, second-chance points — those are huge in games like this.”

When the season began, this game actually was on the schedule — not for April 5, which merely was a fantasy, but for Dec. 5, when the two were in Indianapolis for a game that would have been contested at Bankers Life Fieldhouse, just a short walk from where the two will meet in the season’s final game. A couple of positive COVID tests inside the Gonzaga program led to the game being canceled less than two hours before it was to commence.

Few and Drew then spent weeks trying to find a date and location for the game to be rescheduled. And, to be honest, as they worked and reports emerged they were trying to restore that game, some of us silently rooted against their success.

College basketball was the only widely popular spectator sport that saw its championship canceled in 2020 because of the pandemic — not delayed, reimagined or rescheduled but simply left vacant. For all the sport has endured over the past 13 months, as one that saw myriad regular-season games, conference tournament games and even one NCAA Tournament game canceled, the chance to have its 2021 champion decided by a meeting of the season’s established titans loomed as such an alluring remedy.

“It was very serious, and we tried. We tried and tried,” Few told Sporting News. “Once we got into the first or second week of January, it was looking like the Big 12 schedule was going to be so hard to — it already had cancellations, I believe — so it was going to be hard to slide a non-league game in when they already had so many games to make up.

“Scott and I were on the phone … were planning this all the way back into July and were really trying like crazy to actively get out and talk to other coaches, who were great, about scheduling games and playing games to just, after losing the tournament last year, to just put college basketball back in the forefront of everybody’s minds.

“When we got the shocking news the morning of our game, that didn’t stop us. We kept trying. And by the time we got to mid-January, it looked pretty futile, so we just said, ‘Let’s do everything we can to make it all the way to this point.’ Pretty amazing that we both did.”

Gonzaga guard Joel Ayayi, a hero of the dazzling overtime semifinal victory over UCLA with his 22 points and six rebounds, acknowledges it was for the best, ultimately, that the December game did not occur as planned and that “it’s going to happen as the best game of the season.”

“The fans are happy. The people that love basketball are happy. I, personally, don’t really care, but it’s obviously more fun to play a team that you’ve never played before,” Ayayi said.

Few referred to the “little futile human plans” constructed months ago to put Gonzaga and Baylor on the same court that failed, whereas the tournament conjured the meeting and delivered it on the game’s biggest stage.

“God always has a plan, and as is usually the case, his plan is better than ours,” Few said. “I think the way it turned out is probably the best scenario you could possibly imagine for college basketball in general and, heck, sports in America.”