Twenty years later, Cathy Freeman still sits at the end of the track in quiet bewilderment.

Now, 20 years on, she has a skimming appreciation of the enormity of what she did. The least of it was to win a footrace. 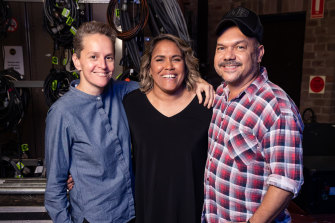 Like Adam Goodes before her, Cathy Freeman decided to tell her story in her own way in a film about her life to mark the 20th anniversary of her gold medal victory in the 400m at the Sydney Olympic Games on September 25.

The film, to be screened on the ABC on Sunday night, elegantly recaptured that period and the idea of how Freeman's race was all about race. How her race elevated her race.

Since she emerged in Australia as a gifted teenager, sections of the country wrestled with how to deal with the precociously talented runner at a time when a light was being shone on Australia's relationship with its first peoples.

I was a kid who was quite embarrassed to be a black kid, an Indigenous kid. I grew up with that self-image.

Freeman embodied that Australia. Before the Sydney Olympics, a quarter of a million people marched over the Sydney Harbour Bridge for reconciliation at a time when the federal government refused to apologise to the stolen generations.

"I was a kid who was quite embarrassed to be a black kid, an Indigenous kid," she recalled.

"I grew up with that self-image. I could never understand why I smiled at someone and they didn't smile back. I would get really upset – why don't you smile back? It used to devastate me." 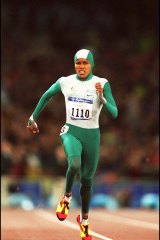 She told of how at 10 she won a footrace but was never given the winner's trophy. "Apparently because I was black," she said.

At the Commonwealth Games in Victoria, Canada in 1996 Arthur Tunstall, the powerful but controversial Games administrator, thundered at Freeman for celebrating with the Aboriginal flag and an Australian flag during her gold medal victory lap.

"I have always been very mindful of my ancestors."

The film explains how her paternal grandfather Frank Fisher fought with the light horse in WW1 but when he returned to Australia his service was not recognised and he was not entitled to land grants as white soldiers were.

Her maternal grandfather George Sibley refused to sign over control of his work pay cheque to the local police station and so was banished, along with his family, to Palm Island.

The idea of who Freeman was and where she came from was so fundamental to understanding her but also understanding why her victory in Sydney remains so significant.

She had lit the flame to open the Olympic Games. She was the home country's best athlete on the track – the biggest sport at the Olympics – and she carried the torch for a change in race relations in Australia. 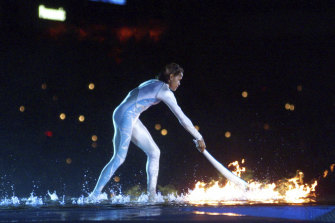 But ultimately she was also an athlete and it was a story of running and winning. And to do that she had to confront Marie-Jose Perec, the French champion who had won the two previous Olympic gold medals.

Perec was an enigmatic, intimidating presence on the track. Tall and imposing, she was classically athletic and powerful to the shorter Freeman's long-legged fluidity.

Leading into Sydney, Perec was the rival who could stop Freeman from winning gold even though she had not beaten Freeman in four years at that time. The attention on her was acute, the drama reminiscent of a soap opera. She was harassed and hounded and eventually controversially fled the country in mysterious circumstances, amid doubtful stories of intruders and threats.

Later, Perec said: "The 400m in Sydney was not a race against Cathy Freeman, it was a race against an entire nation which had its problems. I was only prepared for a 400m." She was not wrong.

The race was a moment when time stopped for everyone, including Freeman. Michael Johnson, who that night would win a second consecutive gold medal, said all of the eight finalists in the men's 400m left the call room to go out on the track and watch Freeman race. 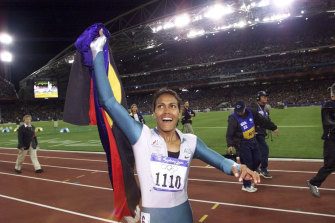 Freeman had felt calm by the time of her race, able to blinker out the noise of 110,000 people in the stadium.

She wore a hooded speed skater fast suit designed specifically for her to reduce wind drag. It was trialled and fine-tuned but even those at Nike, who made it, were uncertain until the night that she was actually going to wear the suit.

With her coach Peter Fortune they recalled the race plan and how she would attack the race. Commentator Bruce McAvaney and her biographer, journalist Scott Gullan, remember the horror of realising as she rounded the final bend that she was in third place. She flew home, cut a look to the clock for her time and dropped to the track, spent. 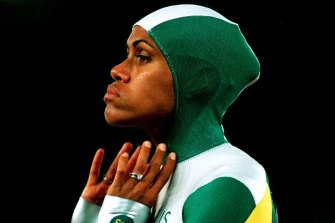 Fortune said: "The first thing she said to me was, 'Oh Fort, the time was a bit slow.'"

She might have been a symbol of race in this country but she was also first and foremost an athlete.

"I should have run under 49 [seconds] and I didn't and I knew I had a lot more in me," Freeman said.

But she accepted the other women never really stood a chance.

"I feel like I am protected. My ancestors were the first to walk this land. It [is] a really powerful force. Those other girls were always going to have to come up against my ancestors," Freeman said.

September 13, 2020 Athletics Comments Off on ‘I’m black and I’m the best there is’: Freeman’s race was all about race
NFL News