David Warner has been issued with a timely reminder that his Test spot won't be set in stone as the dashing opener prepares for a crucial series of Sheffield Shield examinations over the coming month.

Warner will be 33 by the time the first Test against Pakistan starts at the Gabba in November and must bounce back from a dire Ashes campaign in England, where he was terrorised by Stuart Broad and made just 95 runs (average 9.5) across five Tests. 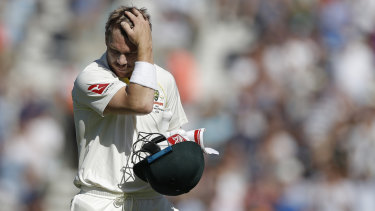 That stretch included the dubious honour of being the first batsman in Test history to be dismissed in single figures eight times during a series. He looked all at sea in his first Test series back after his 12-month sandpaper suspension, although openers on both sides couldn't cope with the new ball.

Coach Justin Langer and captain Tim Paine have both backed Warner to be part of the XI that faces Pakistan in Brisbane to start the red ball summer and the expectation is that he will continue to occupy his spot if he shows even a glimpse of form in the Shield games.

His form at home is at odds with his returns overseas, which isn't unusual for Australian players that are far more comfortable on the bouncier domestic tracks. He averages just under 60 at home in Test cricket compared to just under 35 overseas.

Even so, selection chair Trevor Hohns was making no promises when he spoke to reporters on Tuesday after unveiling the T20 squad to play a series of fixtures against Pakistan and Sri Lanka.

Warner was part of that group and Hohns said he had zero doubts that the right-hander would fire in the shorter formats. Whether that translates to a second coming at Test level remains to be seen, with Hohns refusing to guarantee Warner's spot at the top of the order.

"I'm not going to comment on that right now," Hohns said when asked if they would persist with Warner regardless of his Shield returns. "The slate's wiped clean of course [after the Ashes]; different conditions [in England], but it's nice if we have in-form openers.

"David knows what he has to do as well as anybody, same as [fellow opener] Marcus Harris and any of the players that played in England. Make no bones about it, there is a couple of batting spots, two or three, up for grabs.

"There are plenty of openers around the country. It's up to them to perform."

Getting the pairing right early in the summer will be vital for Australia, who would rather not chop and change on form to try and find a workable pairing. And they will not want to again rely on Steve Smith to prop up the top order.

Both Smith and Warner will be in Brisbane from Thursday playing for NSW in a crucial Shield outing against a Queensland side that includes opening candidates Joe Burns and Matt Renshaw. They have four Shield rounds to state their case to the selection panel.

Hohns said Usman Khawaja was another opening candidate and had performed well in the role in the past. But it's more likely that Khawaja would be considered down the order should he be reinstated after being dropped ahead of the fourth Ashes Test.

While Smith and Warner will play their first Shield match for NSW in two years, the star bowling trio of Pat Cummins, Josh Hazlewood and Nathan Lyon will be rested given their heavy commitments in the upcoming summer.

It shaped as a big occasion for middle order aspirant Kurtis Patterson but he will miss the match against the Bulls after suffering a quad strain.

Related posts:
October 8, 2019 Сricket Comments Off on Warner given timely reminder that runs must do the talking
NFL News