Adelaide: The manager of David Warner says the batting star is playing better without an official leadership title and is unlikely to make a return to the Big Bash League.

Powerful celebrity agent James Erskine has been central to Warner's rise from the depths of despair after the Cape Town ball-tampering scandal into a figure who has gone a long way to regaining the respect of his teammates and cricketing public. 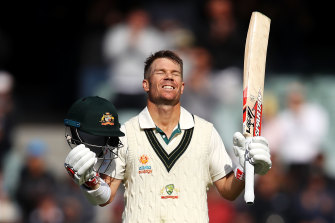 Warner remains arguably the world's premier Twenty20 dasher and his prolonged absence from the BBL is a significant loss. There had been strong interest from the Melbourne Stars this season but that now appears unlikely to morph into a deal. Smith has returned to the Sydney Sixers and will play later in the tournament.

"He [Warner] is playing so much cricket. We talked about playing Big Bash. He is playing in The Hundred in England for Mark Nicholas' lot in Hampshire," Erskine said.

"Playing the Big Bash and captaining a team there … he is [already] playing all forms of the game. You just have to take a break. There is so much cricket on. Then they [Australian one-day international side] are going off playing in India … in the middle of our cricket summer.

"I don't think there is any advantage in playing the Big Bash. You don't want to over do it. My advice to him was not to do it. He didn't want to do it really anyway.

"Certainly, Fox [Sports] are interested in him playing, it's to their advantage and they have actually been very good to David. Look, who knows? Never say never but I would say it's pretty unlikely."

Warner, 33, has flagged reducing his international playing load either after next year's Twenty20 World Cup in Australia or the ensuing T20 World Cup in India in 2021. Whether that comes at the cost of Test cricket or the short forms remains to be seen.

"No one has made any decision. He hasn't had a discussion with me about it. This is his first season back doing everything, and everything seems to be going quite well. He is only 33," Erskine said.

Erskine said he had fielded "quite of a lot of enquiries" about potential sponsorship deals with Warner but would not divulge any details.

"People that dropped him like a stone are pretty unlikely to come back. It's their competitors which are probably more likely to do it," he said.