Ellyse Perry says she wouldn't "enjoy" cricket if she was forced to give up her status as an all-rounder due to fitness issues.

The Australian star was ruled out of this month's one-day international series against New Zealand after having surgery on an injured hamstring. She picked up the strain while fielding during the T20 World Cup. 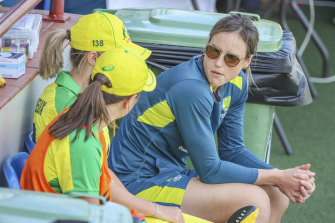 Perry sits on the sidelines for game one in the one-day international series against New Zealand.Credit:Getty

Australia coach Matthew Mott has admitted the idea of using Perry as a batter rather than an all-rounder, as a way of lessening the stress on her hamstring, had been discussed. Perry said that would not be happening.

"I'm not quite 30 yet, so I still feel like I've got a lot left. I just need to get on the park again and keep playing and then all this will be forgotten and it won't be as big a deal."

Perry is ranked third in the ODI world batting charts and fifth for bowling. She was adamant she would play as an all-rounder upon returning to the field in the WBBL for the Sydney Sixers.

I've been really keen to make sure that when I do play again it's not at a lower level of capacity then what I'm used to.

Due to COVID-19, this year's WBBL will be a six-week condensed season held in a Sydney hub, with the workload much greater compared to past seasons.

"From my perspective, I still have a lot to play," Perry said. "We ended up taking a pretty conservative approach to the New Zealand series in the hope of making sure that it was 100 per cent good to go for the start of the BBL – which it's looking that way."

The 29-year-old said she had been training at 100 per cent for close to a month and was ready to go for the first Sixers game on October 25.

"I've been really keen to make sure that when I do play again it's not at a lower level of capacity then what I'm used to," she said.

"There is still two weeks away. But if we are talking about right here, right now playing in that first game … I can't see why I wouldn't."

Despite the cricket calendar remaining relatively unscathed by the pandemic, Cricket Australia's free-to-air broadcast partner Seven West Media threatened to tear up its contract over concerns this summer’s schedule would lack "quality".

"There's a lot that has gone into making this competition work … the concessions that CA have had to make in terms of getting the series up and then obviously all the planning in terms of biosecurity and the impact that is having on everyone is huge," Perry said.

"Looking at it and what this competition has done for women's cricket, not just here but around the world, makes it all worth it."

October 12, 2020 Сricket Comments Off on ‘The only way I want to play’: Perry refusing to give up on all-rounder role
NFL News